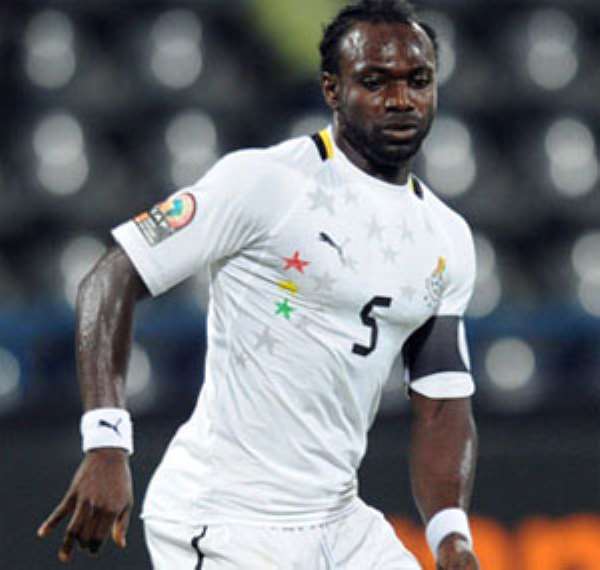 Ex-Ghana FA boss http://www.clicksor.com/ Dr Nyaho Tamakloe has backed calls for the return of John Mensah, along with Sulley Muntari and Jordan Ayew for the World Cup play-offs against Egypt.

The three players were absent when the Black Stars beat Zambia 2-1 to secure passage to the crucial play-offs stage.

Injury-prone Mensah has been frozen out of the national team due to club inactiveness. Muntari was overlooked after he delivered his apology letter late following his tirade at coach Kwesi Appiah during June's World Cup qualifier against Lesotho in Maseru. Ayew, on the otherhand, was not picked despite making himself available for the game against the Chipolopolo after rescinding his decision not to play for the West African country.

The controversial ex-Ghana FA boss has urged the Ghanaian trainer as a matter of urgency to recall the trio for the must-win game against the Pharaohs in Kumasi on October 13.

'This is a matter of 'operation all hands on board' to form a strong team to eliminate Egyptians to pave way for us to qualify for the World Cup in Brazil; so Mensah, Ayew and Sulley should be brought into the team,' Dr. Tamakloe said.

'I know Kwasi Appiah has disciplinary issues with Sulley and myself, I have been on him for quite some time, but I think we need such players to face the Egyptians.

'I will strongly suggest that if former captain John Mensah is fit he should be brought back into the team because he will help to solidify the defence.

'Not forgetting Jordan Ayew because it is all hands on deck and I'm happy Michael Essien is back and also I think the coach must invite all players that we knows are Stars players, players that can defeat the Egyptian team.'

Kwesi Appiah is expected to assemble a crack side to face a tricky Egyptian side at home next month before the return leg in November.

Akufo-Addo not bound to nominate recommended MMDCE hopefuls ...
25 minutes ago