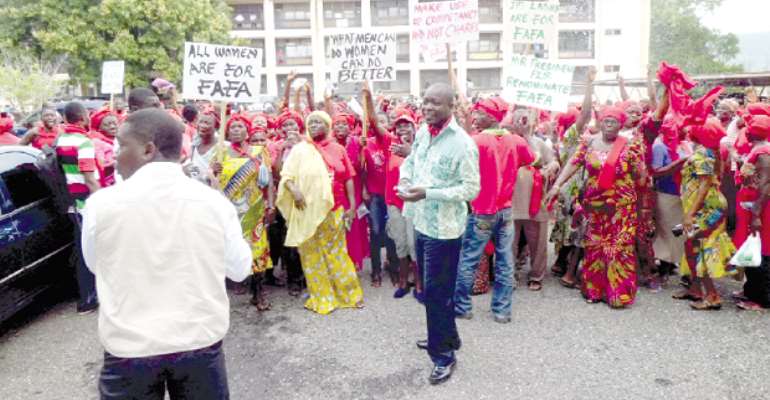 Some women groups drawn from the Ho municipality took to the streets in Ho yesterday calling for the renomination of Mrs Fafa Adinyira as the Municipal Chief Executive.

The groups were: Mahama Ladies, Ho Market Women, Ho Central Constituency of NDC Women's Wing and Concerned Youth of Ho Municipal Assembly.  They had placards with inscriptions as 'JM Ladies are for Fafa', ' President, remember the Gender', Make use of competencies, not chaff', 'No Fafa, No NDC, No vote 2016', 'What men can do, women can do better'.

She polled 33 per cent of the votes cast, while the law makes it mandatory for nominees to secure two-thirds of the support of the assembly members before they can become DCE/MCEs.

In a resolution jointly signed by 12 demonstrators and  presented to the Volta Regional Minister, Mr Nii Laryea Afotey Agbo, they said having known Mrs Adinyira as a hardworking mother and a committed member of the National Democratic Congress (NDC) with an enviable experience as a human resource manager of Gold Mining Company, where she had worked for several years, they did not doubt her ability to live up to her responsibility.

The statement said they were baffled when the scale tilted against her during the endorsement exercise and said the circumstances were still lingering in the minds of the people in the Ho municipality, especially among women.

It stated that the woman was very competent for the position and that has even been attested to by those on the other side of the political divide and, therefore, pleaded with the president to listen to the cries of the people who toiled to put him in office to consider re-nominating Mrs Adinyira as MCE for Ho Municipal Assembly.

'We are very confident that when re-nominated, with all the views and opinions we have gathered, the best groundwork will be done in consultation with the various stakeholders to enable her  to get the two-thirds majority this time round', the resolution stated.

It called on religious bodies, traditional rulers, the youth and women especially to support Mrs Adinyira for the good Lord to hear their plea and grant them their heart's desire.

In his response, Mr Afotey Agbo promised them that Mrs Adinyira would be re-nominated but said the onus lay on the assembly members so they should go back and talk to them.

He said the agitation by the people had left no option for the government than to bring her back.