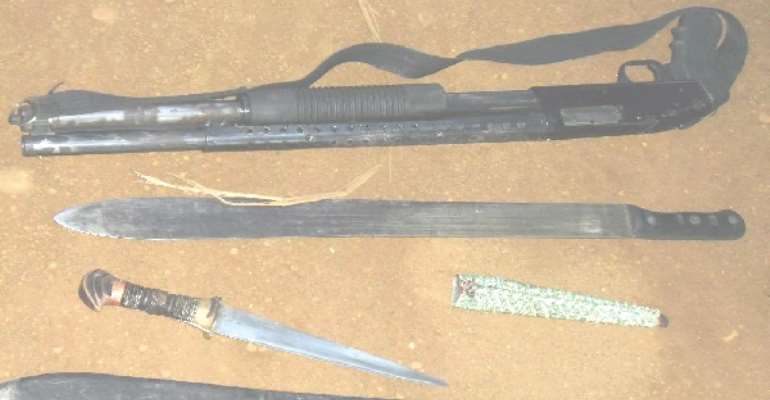 The bravery exhibited by two passengers on the Damango-Tamale road last Friday afternoon saved a Daily Graphic reporter and other passengers from being robbed by suspected armed robbers near the Fulfulso Junction.

The robbers had succeeded in shooting the tyres of a Nissan pick-up with registration number GR 9204Y at a spot between Janikuraa and Kojokuraa and asked all the occupants to lie down. They then stopped all vehicles that were approaching  from either the Tamale  or Damango direction.

The Daily Graphic reporter and other journalists from Metro TV returning toTamale  in a pick-up from a programme at Bole saw two passengers who had escaped from the robbery scene running towards them and signalling them to go back.

Sensing danger, the reporters asked their driver to quickly turn the vehicle around and return to Kojokuraa, which is about two kilometres away.

The driver obeyed and all other vehicles around, including mummy  trucks that were returning from Damango and Busunu markets, and followed to Kojokuraa, where colleague journalists in Tamale were contacted to inform the police.

But before the police could arrive, the vigilante group at Kojokuraa quickly mobilised themselves in less than 15 minutes and phoned their counterparts in Janikuraa to meet them at the robbery spot to engage the robbers.

By the time they got to the spot, the robbers, sensing danger, had run into the bush and the villagers, who were armed with guns, pursued them.

Gunshots were heard in the bush and one of the villagers came out in about 10 minutes and said one of the robbers had been shot dead while the other two had escaped with gunshot wounds.

The Metro TV camera man and some of the passengers ran into the bush and took shots of the dead robber who was of Fulani extraction.

A pump action gun, a knife and a machete were found on him.

Instead of keeping quiet and going to nurse his wounds, one of the wounded robbers ran for some distance and sat by a tree groaning and wailing.

The groaning and wailing attracted the villagers who went and shot him dead.

The killing of the robbers sparked wild jubilations among the passengers who described the series of robberies along the Fulfulso Junction-Damango section of the road as unbearable.

Some of them also commended the police for responding to the situation promptly.

Police officers at the Busunu Police Post arrived soon in a private-rickety pick-up given by a resident at Busunu  after the villagers had pursued the robbers into the bush.

Later on Saturday, the Daily Graphic met Detective Gbeve at the Tamale Teaching Hospital mortuary and he said the bodies of the suspected robbers had been deposited there for autopsy.

Meanwhile, the Northern Regional Public Relations Officer of the Ghana Police Service,  Assistant Superintendent of Police (ASP) Ebenezer Tetteh, says the police are yet to apprehend the other suspected robber who escaped.