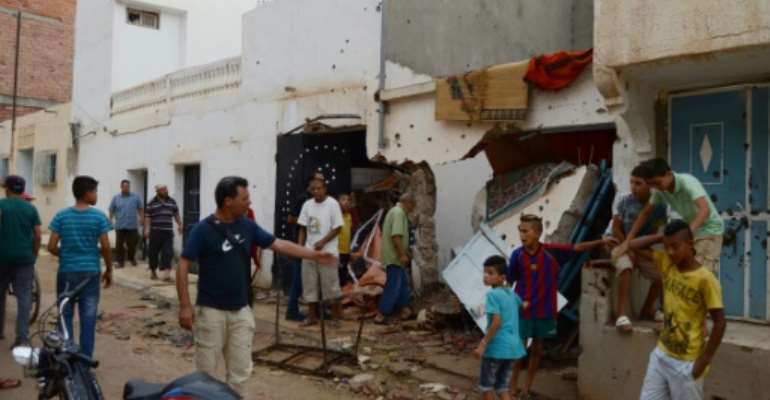 Two suspected jihadists holed in Kasserine gathering before being killed by security forces during a nighttime raid. By Rzouga Khlifi (AFP)

Kasserine (Tunisia) (AFP) - Two suspected jihadists were killed in a nighttime raid by security forces in the Kasserine region of Tunisia that also left a civilian dead, the interior ministry said Wednesday.

It said a gun battle on Tuesday night between security forces and the suspects holed up in a house lasted several hours, and that the civilian was hit by shots fired by the jihadists.

The suspects were on a wanted list and had been preparing "terrorist actions in the region", the ministry said in a statement, while spokesman Yasser Mesbah told AFP the two were members of the Islamic State jihadist group.

He later told a news conference that a third suspect had been detained for questioning.

Guns, grenades and an explosives belt were seized after the raid, a security source said.

The operation came after three soldiers were killed and nine wounded Monday in a blast near Mount Sammama, a hideout for jihadists at war with Tunisian authorities.

Since Tunisia's 2011 revolution, jihadist attacks have cost dozens of lives among security forces as well as civilians, and 59 foreign tourists were also killed in 2015.