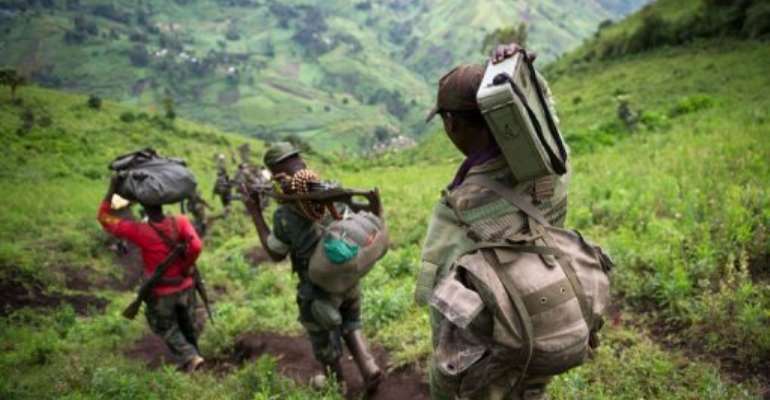 M23 rebels leave their position in the village of Karuba, eastern Democratic Republic of Congo, on November 30, 2012. By Phil Moore (AFP/File)

KINSHASA (AFP) - The leader of the Democratic Republic of Congo's M23 rebels said Sunday they were ready to disarm under two conditions: the return of Congolese refugees and the eradication of Hutu militia the FDLR.

M23 chief Bertrand Bisimwa said the army mutineers, whose rebellion has terrorised eastern DR Congo for more than a year, would return to civilian life if the government agreed to their demands at peace talks set to resume in Uganda after breaking down in May.

"We are ready to disarm under two conditions: first, that the question of the FDLR be resolved, and second, the return of the Congolese refugees living in camps" in Rwanda, Uganda and Burundi, he told AFP.

The M23 was founded by former Tutsi rebels who were incorporated into the Congolese army under a 2009 peace deal.

Complaining the deal was never fully implemented, they mutinied in April 2012, turning their guns on their former comrades and launching the latest rebellion to ravage DR Congo's mineral-rich but conflict-prone east.

The United Nations and various rights groups have accused the M23 of atrocities including rape and murder in a conflict that has caused tens of thousands of refugees to flee the country.

The UN also accuses Rwanda's current Tutsi leadership of backing the M23, a charge the country has adamantly denied.

The rebels for their part have accused the Congolese army of joining forces against them with the FDLR, or Democratic Forces for the Liberation of Rwanda, which is also active in eastern DR Congo where its members fled in the wake of the 1994 genocide in Rwanda.

Some FDLR members are wanted on charges of taking part in the genocide, when Hutu extremists killed around 800,000 Tutsis and moderate Hutus.

"We don't want them (the FDLR) on our territory anymore," said Bisimwa, calling for the Hutu group to be "neutralised" and Tutsi refugees returned.

The M23 have recently retreated from their positions around the key eastern city of Goma in the face of a fresh offensive by the army and a new UN combat force created to fight the rebels.

"The M23 isn't interested in joining the army or the Congolese government," he said.

"That army's not attractive," he added. "The M23 is ready to demobilise and return to civilian life."