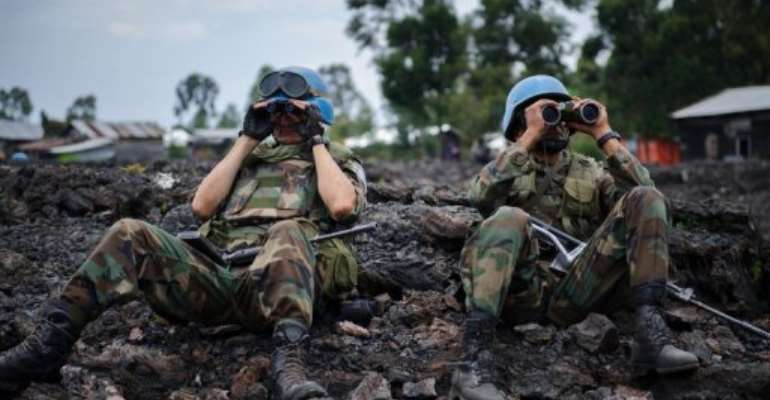 UN peacekeepers look through binoculars at M23 rebel positions on the outskirts of Goma in DR Congo on November 18, 2012. By Phil Moore (AFP/File)

UNITED NATIONS (AFP) - UN leader Ban Ki-moon said Friday that Democratic Republic of Congo rebels have fired shells into neighboring Rwanda, launching into a dispute that has heightened tensions between the two neighbors.

Ban also said "spoilers" encouraging mounting violence in eastern DR Congo must be held to account but he did not follow other UN officials in naming Rwanda as a backer of the rebels.

Rwanda has said DR Congo government forces fighting M23 rebels in the east of the giant country have fired into its territory and called the acts "a provocation." Rwanda says a woman was killed in shelling from DR Congo on Thursday

Ban blamed the M23 rebels in a statement released by his spokesman Martin Nesirky.

Ban is "deeply concerned about the escalating violence" and "condemns in particular the indiscriminate shelling by the M23 that caused deaths, injuries and damage among the civilian population in the eastern DRC and in the immediate border area in Rwanda, as well as among United Nations peacekeepers," said Nesirky.

The UN leader also "emphasizes that spoilers and those who violate international law must be held accountable," the spokesman added.

While he did not identify the "spoilers," Ban "calls on all regional actors concerned to exercise utmost restraint and refrain from any acts or statements that could lead to a further deterioration," said Nesirky.

"He also calls on all member states with influence in the region to assist in easing tensions."

UN experts say Rwanda has backed M23 and a top UN official told the Security Council that Rwandan troops have helped M23 in their latest offensive against government forces around the eastern city of Goma.

The UN has deployed a special intervention brigade to back the government army and Ban stressed "that the United Nations remains committed to taking all necessary actions to protect civilians in the eastern DRC," said the spokesman.

The surge in fighting is a serious challenge to Ban's new campaign to organize a political settlement to end more than a decade of strife in eastern DR Congo that has dragged in many of its neighbors.