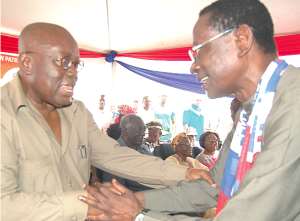 It must have been a low news cycle day, or ominous fear for the much awaited Supreme Court election petition judgement day, Ghanaians were awaken to a media blitz of 'all inclusive government', said to have been triggered by Archbishop Palmer Buckle, on August 22nd, 2013. Better to have come from him than Pastor Mensah Otabil, the NDC will have pooh-poohed all over it. For not long after, the NDC chairman, Dr Kwabena Adjei and Minister Fiifi Kwetey were all on board.

If our history serves us right, we can recall that this idea of inclusiveness informed on Nkrumah's one-party rule. We called that dictatorship and kicked him out. To go back 50 years later, in a full-circle, to the ethos of Kwame Nkrumah's one-party rule or Kutu Acheampong's Union Government, will have made nonsense of the coups that kicked them out. Even more so, this is not a novel idea in Africa; it has been practiced in Zimbabwe and Kenya to no particular success. In Egypt it has led to a new internecine conflict. It did not work in la Cote d'Ivoire; it rather deepened ethnic and political conflict. Hence all-inclusive government is no panacea to our hydra-headed problems and it does not present the electorate with any real choice. In my candid opinion it shall lead to a new behemoth - a political class that will create, loot, and share the spoils of power together, much to the disadvantage of the electorate.

So if we are not talking about one or two token ministers from the opposition, what are we talking about then, proportional representation or what? I am not particularly sure. From the look of things it appears the proponents of this idea want to cure acrimony, political mischief, and lessen tension in the country. But who says tension is bad, from purely public policy position, a little tension is good, it keeps people on their toes and brings the best in everybody entrusted with power or responsibility, as they know they are under constant microscope, and can be kicked out if they fail to deliver. Power sharing, all-inclusive government, union government and what have you, rob the people of the chance to compare and contrast competing ideologies, visions and policies.

What do we mean by all inclusive government then? What will be acceptable to all? I hope it will not mean one ideology and things like that. Parties should compete on the issues and present to the voters different visions and policies to deal with the issues, and the electorate will vote for the party which visions they identify with.

I am also very much aware that given our particular station in economic development, most governments are going to be pro-poor and social-interventionists, it doesn't matter whether they are NPP or NDC. I will presume all-inclusive government under the current dispensation and discussion means appointing people from across the political divide in order to lessen political tension and mischief.

So what stands in the way of all-inclusive government?

Firstly, I will start with the 1992 Constitution. After practicing with it for 20 years now, we should realize that it is not meeting our particular needs and aspirations. The practice of appointing majority of ministers from the governing party members in parliament is very dumb and farcical. It will make sense if we were practicing prime-ministerial government that can have a no-confidence vote over its head. We are practicing presidential government and to appoint majority of ministers, over 80% of them, from parliament as well as the heads of state institutions, local government, agencies and state corporations presents peculiar problems. To show how purposeless it is to appoint over 80% of ministers from the majority party in parliament, we just recently learned, the majority leader, Benjamin Kumbour, is not even included in the cabinet of president Mahama. So we have a majority leader, who is supposed to be leader of government business in parliament, cut out of the loop. He is just a decorated powerless fixture - Opaninhunu - with no real muscle; he cannot oblige anybody in cabinet, and sorry, he is no prime minister either. If all-inclusive government is to limit government appointees only to ministers and leave the rest of appointments to career civil servants, appointed on merits, irrespective of one's political colour, then all-inclusive government will have some gravitas.

Secondly, the current system undermines the concept of separation of powers and its attendant checks and balances principle; it ties the hands of the executive to make do with whatever they have in parliament. There should be a complete separation of powers and no sitting minister should also be a member of parliament. When that happens, parliament's supervisory role and ability to exact accountability from ministers will be strengthened. The president too can have the free hand to appoint or form his cabinet from persons with various capabilities, and not necessarily from his party members only. There are capable and patriotic citizens out there who simply don't have the stomach for the current winner-takes-all adversary governance system.

Thirdly, decentralization of governance should be taken to the fullest extent by making sure that all MMDCEs and Regional Ministers are directly elected by the people. Yes regional ministers too, so that the people can exact accountability, not the president imposing his cronies on them.

Fourthly, in order to fight corruption to the fullest efficiency level, there should be separate ministers of justice and attorney-general. The two functions or offices should not be reposed in one person. I will stick out to say we should even elect the attorney-general directly or let parliament appoint one, if we want to fight and uproot corruption in the country. Can you imagine what we could have done with Attorney-General Martin Amidu being appointed or elected separately from the president; president Mills wouldn't have been able to fire him at will to protect corrupt elements in his government and he will only have been accountable to parliament and the people. This is the way to go if we want to uproot corruption from the public sector.

In conclusion, I think many people are attaching different meanings to what it is to have an all-inclusive government. If it is to tackle and reduce political tension and rally the people behind any particular president, we can achieve the same by reducing the over-concentration of power in the hands of the executive president. Decentralization and allowing the people to choose their own representatives at every level of governance will reduce acrimony. Decentralization and election of all representatives from the local to national level will achieve participatory and representative governance, accountability and real democracy. The present system just germinates cronyism, nepotism and patronage with no real benefit for the electorate.