On December 7th, Vote out Propaganda, Incompetence, and Gargantuan Corruption…… 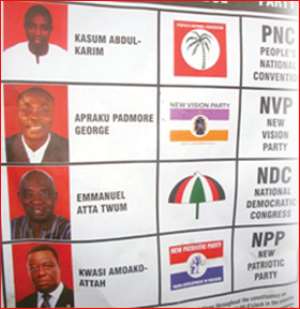 By Eric Kwasi Bottah (alias Oyokoba)
And ring in visionary leadership. Ghanaians will go back to the polls on December 7th, 2012 to elect both a president and members of parliament. This is a sacred covenant by which the people, through their own freewill, will select legislators and chief executive to champion their course for the next four years. Which Ghana will we wake up to on December 8, 2012: the status quo or a game changer for the better? A wise visionary leader is the one who will plant a tree to give shadow and comfort to the next generation, albeit, being fully mindful that he would not live long to enjoy the soothing shadow of the tree he planted. That is the man Nana Akufo Addo.


Back in 2007, then candidate Mills sought to cast a slur on the sterling performance of President Kufour at the economic front with the nauseating comment that Kufour's impressive growth of the GDP to an all time record of 7.8% and quadrupling the economy from $4 billion to $16 billion, could best be assigned to sheer good luck and not good management. That for the 19 years that the P/NDC ruled the house they never had it so good like Kufour when the world's price for cocoa and gold hit unprecedented heights. For Professor Mills to assign good luck to a sterling performance applauded all the world over, went to show how unimaginable that he was. He substituted good luck and prayers for good policies. And like everything he did when he and John Mahama were given the mantle to rule in 2008, reptilian infatuation to religion, superstition and the oracles of Nigerian Pastor T. B. Joshua, took the centre stage in the administration of this country. When confronted with what accounts for their abysmal performance, these pretentious socialists channeled the only cliché they imbibed from the communist manifesto: use religion as opiate for the masses, and hope they will lick it. Hence God and not they was in control of their mishandling of the affairs of Ghana, whereas we the people had voted for them to take charge. Let somebody say dereliction of duty and responsibility.

No government in Ghana's history has had it so good with resource bonanza like Mills-Mahama government. You name it: gold, diamond, timber, cocoa, bumper harvests, and oil, Ghana had it all, coming on the heels of massive debt forgiveness. And yet what did we see given this once in a life time golden opportunity: unprecedented loans the aggregate of which exceeded all the loans contracted by all previous governments combined. Mills-Mahama administration borrowed massively to cover their inability to manage the local economy. Show me the investments one administration made and I will show you the merits of the loans they contracted; under Mills-Mahama there is nothing but gapping disjointed and chaotic litany of shoddy works all over the country, generating no return to capital to warrant the investments made in them. Mills-Mahama administration has incompetence, corruption and putrefying propaganda by hired reptiles written large all over it. Ghanaians deserve better, Ghana needs a visionary leader and I have my bet on Nana Addo Dankwa Akuffo Addo. Ghana does not need a president and a party whose primary objectives are to create jobs overseas by giving out most government contracts to overseas companies whilst Ghanaian companies go broke and lay off employees.

Nana Akufo Addo is a veteran of Ghana politics, always fighting for the rights and freedoms of the people. The man has held steady no matter the unrelenting demonization spewed on him by NDC rented press and hired hoodlums, ragamuffins, and vagabonds like Felix Kwakye Ofosu, Samuel Okudzeto Ablakwa, Peter Boamah Otokunor, Kobby Acheampong, Koku Anyidoho, Asiedu Nketia, Nii Lante Venderpuiye, James Agyenim Boateng, Kofi Wayo, Bature Iddrisu and the bad ass of them all, grumpy infidel Tony Aidoo. As Attorney-General Nana Addo led the fight to scrap the criminal libel law which many prior governments used to gag the press and freedom of expression. As if to teach him a bitter lesson for scrapping that law that has been in the books since the colonial era, the reptiles in the NDC propaganda communication department have used the opportunity to malign and launch scathing attacks on his personality, but to no avail. Nana Addo's resolve is unshakable and his claim of incorruptibility remains undaunted. Can John Mahama make the same claim? I doubt it. A man who will have multiple children outside his home and wedded wife cannot be trusted. He is corrupt. He is so corrupt; we are told by the former Attorney General Martin Amidu that President Mills wanted him investigated. That for me, says John Mahama does not pass the smell test, when it comes to corruption.

On Friday, 7th December, 2012, Ghanaians will be confronted with two clear choices, the first one: the status quo (NDC) that is overwhelmingly made of mediocrities that have never run their own businesses before. In fact, some of the ministers are still in school, using government departments as tryouts for their unpurified thoughts and emotions. They are increasingly resource envy, jealous of people who have bested them in life and hang on to hollow socialist ideology to feign interest in the matters of the masses when in fact their main primary motivation is to assume power and use the leverage they derive from it to amass wealth, so that they too can get the respect and recognition that the self-made men in the NPP and centre-right of Ghana have chalked for themselves. If you have not noticed, the more corrupt and richer they become, the less they talk about socialism and ideology. Basically they are white collar thieves out to milk the system. What else explains why Jerry Rawlings and his wife now owning Star Hotel, Nsawam Cannery, Cocoa Processing Factory and erstwhile GNTC properties and lands, all previously owned by the state? They run down state institutions and buy them back as divestitures. Sounds familiar, ask Tony Aidoo, the newest scraps dealer on the block.

The second group (NPP) idealizes hard work, fair play, equal opportunity for all kids in Ghana to receive Senior High School education and the transformation of our economy from the export of raw materials to value added industrial output, so as to get more money for the people and create more jobs. The greatest incentive for anybody is to own property which he or she can pass on to their children. So the NPP and the centre-right favor property owning democracy. If you own a piece of property, you will work hard to protect and preserve it. You wouldn't show up for work late and leave early and still expect to be paid a full-day's wage. They realize that even with the best of intentions and efforts still some people will fall through the cracks hence they instituted many pro-poor intervention programs to ensure that everybody gets by with some minimum guarantees such as affordable National Health Insurance Scheme, capitation grant, free maternal care, free school feeding program, micro-financing and now fee free senior high school to take off the table the excuse of why some parents cannot send their kids to school. You would have expected that a president who benefitted from such a scheme together with eighteen of his siblings even though his father was middle class minister in the first republic will embrace such a policy; rather he will cynically say that the south is not ready for such a scheme, but the north is. Nonsense! Poor people are found in every corner of Ghana and it goes against the heart of constitutional rights that some kids have free passage to become presidents and ministers whereas others will have to break their backs to reach the same.

The NDC have elevated and institutionalized propaganda to the high heavens. Perhaps, it is worthy we remind ourselves of some of the outstanding ones traceable to John Mahama's NDC:

Do you see where I am going with this? Ghanaians have been fed a constant barbiturate of lies and propaganda. Let's kick the NDC out for real change to ensue in Ghana. Vote for your self interest. Vote NPP and Nana Akufo Addo on December 7th, 2012 for a new renaissance in Ghana to begin. If for nothing, Nana Addo Dankwa Akufo Addo has forced this election to be an issued based election. He has put free SHS and value added exports on the table. What is John Mahama's offer? That he is not Akufo Addo. That makes no sense. To vote for John Mahama is to give him a veto power over your children's education and future. Don't allow him. He has no Hope, no Cash and no Wonder to offer you, only Wayo and Woyome. A visionless leader is injurious to our health and safety as a country. Progress, Development, and Peace is the mandate NPP seeks. Let's give them the opportunity. Hip hip hip…..hurray!

Stop doing 'abrofos3m' and teach your children your local la...
24 minutes ago

Galamsey fight: Akufo-Addo will be meanly judged by posterit...
33 minutes ago