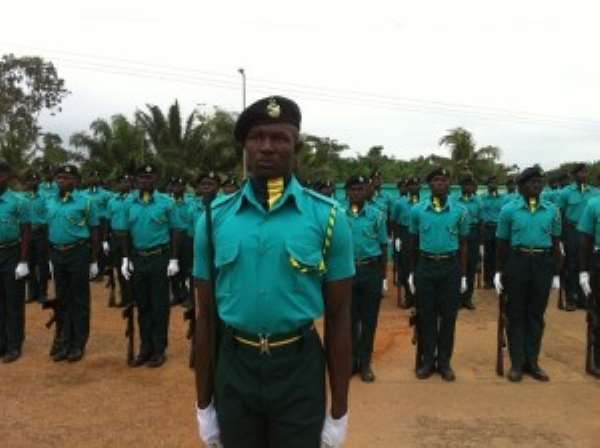 The Minister of Interior, Mr. Kwesi Ahwoi has hinted that the government is taking the necessary steps to address immigration challenges confronting Ghana, especially the influx of illegal foreign nationals into the small scale mining sector.

According to him, the activities of these foreign nationals posed serious national security threats as they degrade the environment and thereby create between themselves and the local communities.

Mr. Ahwoi was speaking at the passing-out ceremony of the 21 st intake of 324 recruits at the Immigration Service Training School at Assin Foso in the Central Region last week Friday.

The Minister revealed that the government had directed the Immigration Service to review and streamline its border control mechanism to ensure that only legal migrants enter the country.

According to him, the Immigration Training School had already trained two batches of Liberian immigration officers, totaling 150 men and women, adding that currently there are four Liberians on the cadet training programme being run at the Academy which signifies the key objective of the Service Academy.

Mr. Ahwoi added that both the Academy and the Training School are undergoing infrastructural developments to expand and upgrade the facilities for hosting and training for both cadets and recruits and key to these developments is the establishment of computer laboratory, a library, additional dormitories and housing for staff.

He stated that the Ghana Immigration Service has a role to play in combating the transnational crimes and urged them to step up its patrol and control mechanisms by intensifying screening and profiling of travelers, enhancing intelligence-gathering measures and cooperating with other agencies effectively.

Mr. Ahwoi noted that the effectiveness and efficiency of any organization is determined by the quality and caliber of its human resource base and these are measured by the kind of persons employed and the training given them to enable them perform the functions expected from them.

Mr. Kwesi Ahwoi also revealed that the government fully supports the development of Immigration Academy and Training School into an international centre of excellence.

According to him, the government duly recognized that while the development would improve the quality of training of immigration officers, it would also improve international cooperation within the sub-region as the nation is confronted with transnational crime and other migration-related issues.