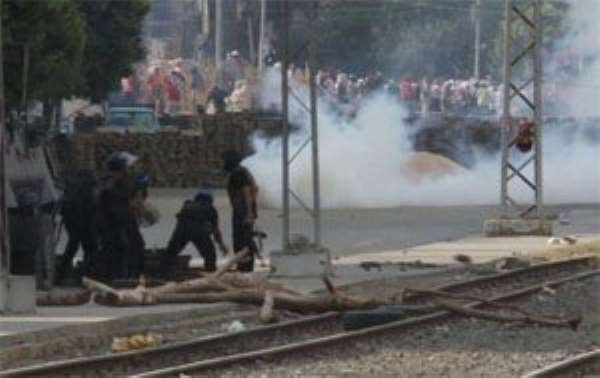 The Muslim Brotherhood said more than 100 died, but the authorities put the death toll much lower.

Authorities say the Nahda Square camp in western Cairo has been cleared.

The interior ministry said a mopping up operation in the streets surrounding Nahda Square was under way. Pro-Morsi activists were chased into the nearby zoo and Cairo University, Nile TV said.

Witnesses at Rabaa al-Adawiya spoke of seeing dozens of bodies on the ground, and the Muslim Brotherhood described the security forces' intervention as a massacre.

A spokesman told the BBC he had been told in a field hospital used by Morsi supporters outside the mosque that 120 people had died.

At least two members of the security forces were among the dead and nine were injured, officials say.

The interior ministry denied any deaths were caused by its forces firing live ammunition.

“Security forces used only tear gas canisters to disperse the protesters though it was heavily fired at by armed elements from inside the two protest camps, causing the death of an officer and a conscript and the injury of four policemen and two conscripts,” the ministry said in a statement.

A safe exit would be provided for protesters and they would not be pursued, “except those who are wanted by the prosecution”, it said.

The interior ministry was keen “not to shed any Egyptian blood”, the statement went on.

Supporters of Mr Morsi have been occupying Nahda Square and the Rabaa al-Adawiya site since he was ousted on 3 July. They want him reinstated.

Large plumes of smoke rose over parts of the city as the operation to clear the camps began, with tear gas canisters fired and helicopters hovering above.

Muslim Brotherhood TV called for people to send cars to the sit-ins to take casualties to hospital.

“We arrested a number of Muslim Brotherhood leaders, but it is too soon to announce their names,” interior ministry spokesman Abdel Fattah Uthman told CBC TV.

It is a heavy-handed operation and is a consequence of the current “winner takes all” climate, he adds, with both sides sticking to their positions and pushing as hard as they can.

There are reports of further protests by Morsi supporters outside the capital.

In the northern city of Alexandria they are reported to have blocked main roads. Hundreds are said to have gathered outside the governor's office in Aswan in the south.

More than 250 people have been killed in clashes with the security forces in the six weeks since Mr Morsi's overthrow.

Speaking to the BBC on Monday, Egypt's Foreign Minister Nabil Fahmy said the sit-ins could not continue “endlessly”.

He said the authorities had been trying to seek an agreement through dialogue.

“If the police force take their procedures, they will do that in accordance with the law by court order and in accordance to the basic norms on which these things are done.”