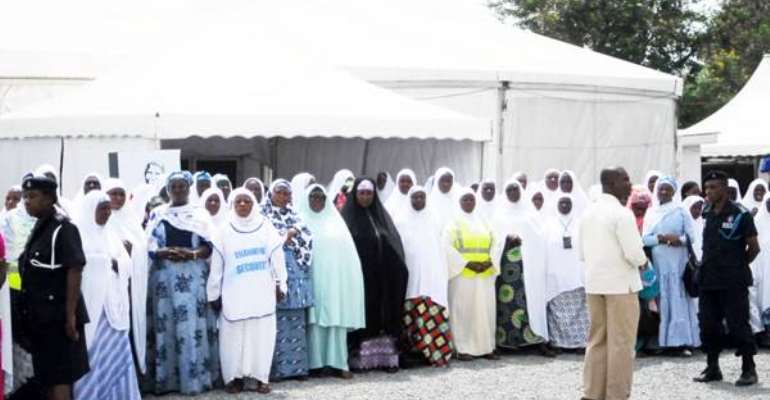 He said the NHC has 17 flights for this year's Hajj and that this would continue till September 28, when the last flight would depart.

He said the return flights from Jeddah to Accra would begin on October 27th till the last flight on November 7.

Mr Tanko, who made this known to the media at the Hajj Village in Accra, said this year's Hajj package include accommodation, food and transport services in Saudi Arabia.

He noted that each prospective pilgrim would pay a total amount of 3,450 dollars or its cedi equivalent and that payment would be on first-come-first-serve basis, adding that, no payment would be accepted after the deadline.

'The committee will only accept payment after the deadline if the quota is not exhausted and the pilgrim will pay a penalty of 100.00 US dollars.'

He said the committee has set August 15th 2013 as the deadline for receiving payments from prospective pilgrims and Hajj Agents, and appealed to pilgrims to obtain receipts for verification and registration and also avoid making payments to individuals.

Mr Tanko said the initial quota of 6,780 given to Ghana had been reduced by 20 per cent, bringing the number to 5,424, due to some expansion works at the holy sites in Saudi Arabia, adding that, the reduction was worldwide.

He said the requirements for the processing of visas for prospective pilgrims are the pay in-slip from the banks, which will be cross checked from the branch payment, for confirmation, a valid biometric passport, 12 passport size photographs and a vaccination card (yellow card).

Touching on Health, the chairman requested the Ministry of Health to provide facial masks for the 2013 pilgrims to Mecca, to insulate pilgrims against the SARS-like coronavirus Middle East Respiratory Syndrome (MERS).

He said the request was in line with a directive from the Saudi Authorities to pilgrims to wear the mask at heavily populated places in the country to avoid getting infected with the deadly disease.

Mr Tanko said the NHC will also run series of public education on the signs and symptoms of the disease.

According to the World Health Organisation, the disease could cause fever, coughing and pneumonia and sneezing, and is spread from human to human but has not yet assumed pandemic potentials and may simply die out.

The outbreak of MERS has been reported since April 2012 in Saudi Arabia, Qatar, Jordan and parts of the Middle East.

The Ministry of Health of Saudi Arabia had so far confirmed 38 deaths and 65 cases.

He appealed to prospective pilgrims and the general public to comply with the modalities for the payment deadline when it is announced to avoid any inconveniences.

Mr Issahaq Aggrey, Head of the Welfare Committee, said his outfit had made the necessary arrangements for the provision of social amenities to satisfy the pilgrims.

He said the amenities include arrangements with Zoomlion, waste management agents, to provide waste bins and regular clean-up of facilities to ensure good hygiene and the provision of mattresses for pilgrims and shelter.

Ex Warrant Officer Class one Sumaila Alidu Yahaya, Head of Security, said the NHC is cooperating with the Ghana Armed Forces, the Police Service and other security services to provide security and ensure law and order by protecting lives and property.