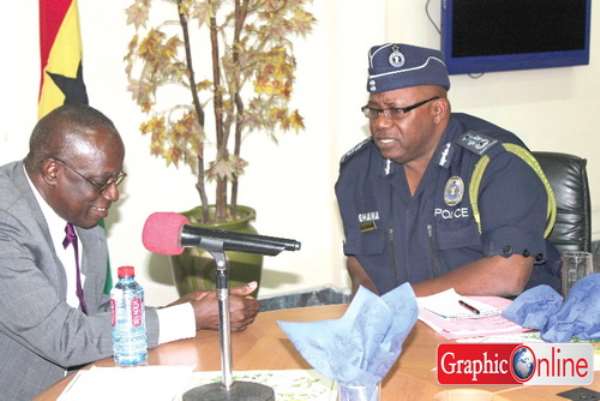 Joint operation centres manned by representatives of the various security agencies have been activated at the national and regional police headquarters in the country ahead of the Supreme Court verdict on the presidential election petition.

At the centres, the representatives of the agencies are to exchange information on the general law and order situation in the country.

The Inspector-General of Police (IGP), Mr Mohammed Alhassan, made this known ahead of a closed-door meeting between the Police Administration and the National Media Commission (NMC) in Accra yesterday.

The meeting was to provide the platform for the two institutions to dialogue and look at ways in which they would collaborate to ensure law and order after the verdict.

The Supreme Court is expected to deliver the final judgement on the petition by the end of this month.

Threat assessments
Mr Alhassan said the Police Administration had done the various threat assessments that were routine to it in the event of any problem that might arise and assured the NMC that morale among the men and women of the Police Service was high.

'As I speak, the joint operation centres, both here at the national and the regional headquarters, have all been activated. You go in there and you have representatives of all the various security agencies working, monitoring and exchanging information as to the general law and order situation in this country,' he said.

Relationship with media
On the relationship between the police and the media, the IGP said the administration had adopted an open-door media approach which was working well.

'The police view the media as strategic partners and stakeholders in public safety and security,' he said, and urged the NMC to use its influence to ensure that the relationship grew from strength to strength.

NMC Chairman
For his part, the Chairman of the NMC, Mr Kabral Blay-Amihere, said as the nation prepared for the Supreme Court verdict, the occasion was apt for the police and the NMC to meet for the peace of the country.

'Now we are getting to the crossroads with the verdict ahead of us. Again, in anticipation of what the media should be doing, just last week we revived our collaboration with the National Communications Authority (NCA) and the two bodies have set up a joint consultative committee that will monitor and evaluate media performance before, during and after the verdict,' he said.

Mr Blay-Amihere said the NMC saw the meeting with the police as another opportunity to engage in fruitful discussions on how the two institutions would execute their mandate in the coming weeks and months.

'As the IGP rightly stated, the media, indeed, have a very strategic role to play in the scheme of things. Like the police, the media operate in the public domain. They are the transmission belts between the public and all the developments that will be unfolding before us in the coming weeks and months,' he said.