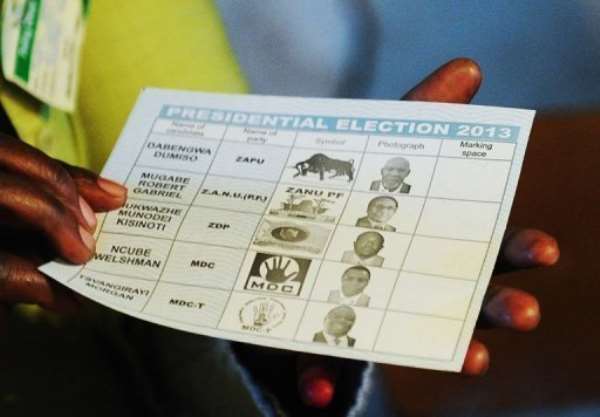 Mugabe, 89, in power since 1980, trounced his long-standing rival Morgan Tsvangirai in Wednesday's polls with 61 percent of the presidential vote while his party swept to a crushing parliamentary majority.

But 61-year-old Tsvangirai, leader of the Movement for Democratic Change (MDC) who has unsuccessfully tried to unseat Mugabe three times, condemned the vote as "fraudulent and stolen" and has vowed to challenge it.

On Sunday, Germany said the election "casts a big shadow on the political and economic future of Zimbabwe," while Australia called for new polls.

"Given our doubts about the results, Australia calls for a re-run of the elections based on a verified and agreed voters roll," Foreign Minister Bob Carr said in a statement.

US Secretary of State John Kerry had Saturday described the election as "deeply flawed" and said Washington "does not believe that the results...today represent a credible expression of the will of the Zimbabwean people."

British Foreign Secretary William Hague added his own "grave concerns" over the conduct of the vote in the former colony.

African and local observers raised concerns over the voters roll, the printing of extra ballot papers, and the turning away of voters at polling stations.

But with gentler assessments from the continent despite noting the flaws, President Jacob Zuma of powerful neighbour South Africa offered his "profound congratulations" to Mugabe on Sunday.

"President Zuma urges all political parties in Zimbabwe to accept the outcome of the elections as election observers reported it to be an expression of the will of the people," a foreign ministry statement said.

The reaction in Zimbabwe's Sunday press was starkly divided, with state-controlled newspaper The Herald proclaiming "President Mugabe romps to victory," while the independent Daily News headlined, "It's a Crisis."

The vote marks the end of Mugabe and Tsvangirai's tense compromise government, forced by bloodstained 2008 polls, that helped steer the isolated nation out of a protracted crisis.

In Harare's oldest township Mbare on Sunday, several hundred Mugabe supporters carried a white coffin draped in an MDC flag, with a red knotted scarf placed on top with the inscription "RIP Morgan."

"People are elated," said one of the marchers, Tatenda Savanhu, 26, an economist.

"It's really a moment of joy that the GNU (coalition government) is now gone that we are going into an era of ZANU-PF."

Tsvangirai vowed to challenge the result in court and said the MDC would boycott government institutions.

"The fraudulent and stolen election has plunged Zimbabwe into a constitutional, political and economic crisis."

Tsvangirai defended his 2008 decision to enter the uneasy pact with Mugabe, who has had him arrested, beaten and charged with treason, saying it had "rescued" Zimbabwe after years of meltdown.

But Mugabe's ZANU-PF party says there is no need for the MDC in the new government.

"We have received over 60 percent of the vote, we have two-thirds majority, why would we want to bring someone else on board?" State Security Minister Sydney Sekeramayi told AFP.

The MDC now has until Saturday to present evidence of fraud to the constitutional court, but finding a smoking gun may prove difficult. The inauguration is expected within 48 hours of the court's decision.

Tsvangirai said he would submit a dossier of "all irregularities and all the illegalities" to the influential 15-member Southern African Development Community (SADC) and called for an urgent summit.

The European Union, which had been moving toward easing long-standing sanctions, has also expressed concern.

But Emmerson Mnangagwa, defence minister and a key Mugabe lieutenant, argued that the result was a game-changer.

"The West will now have to climb down, they must find a ladder and climb down...A democratic election has taken place in Zimbabwe," he told AFP.

The SADC, which engineered the power-sharing government, said the vote was "free and peaceful."

But top SADC election observer Bernard Membe noted: "We did not say it was fair...we didn't want to jump to a conclusion."

The poll's credibility was further tarnished by the resignation of one of the nine official electoral commissioners over "the manner" in which the polls "were proclaimed and conducted."

But Harare based political analyst Blessing Vava said Western concerns meant little with African guarantors having given the polls the nod.

"The issue of Zimbabwe is over and done with," Vava said.

The criticism will also be of little concern to Mugabe, he said.

"He will not care much with what the West will say, this is the reason why they were not invited to observe elections in the first place."