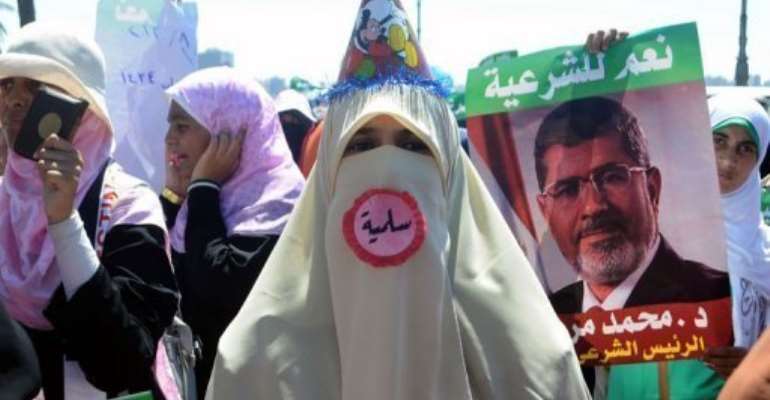 A supporter of Egypt's deposed president Mohamed Morsi attends a demonstration in Alexandria, on August 3, 2013. By (AFP)

CAIRO (AFP) - Supporters of Egypt's ousted Islamist president Mohamed Morsi held firm Sunday on their insistence that he be reinstated after talks with a senior US official aimed at finding a peaceful solution to the crisis.

Following a meeting with US Deputy Secretary of State William Burns, the political arm of Morsi's Muslim Brotherhood stressed its continued commitment to "legitimacy, which stipulates the return of the president, the constitution and the Shura Council," referring to the upper house of parliament.

The US envoy's visit, which followed trips by EU foreign policy chief Catherine Ashton and German Foreign Minister Guido Westerwelle, was the latest move in a diplomatic drive to break the deadlock between Morsi loyalists and the army-installed interim government.

Morsi's supporters have insisted since his July 3 ouster that they would not accept any resolution to the country's crisis that did not include his reinstatement.

Their latest declaration suggested that Burns' visit had failed to shift that position.

"We affirm our welcome of any political solutions proposed on the basis of constitutional legitimacy and rejection of the coup," said the statement from the Freedom and Justice Party.

Burns later met Foreign Minister Nabil Fahmy in a bid to broker a compromise between the two sides.

The diplomatic push came as the Washington Post published an interview with Sisi, who lashed out at Washington, urging it to pressure Morsi supporters to end their rallies.

Tensions have mounted over a looming police move to dismantle two Cairo sit-ins by Morsi loyalists, though Fahmy insisted that authorities had "no desire to use force if there is any other avenue that has not been exhausted."

"There is an open invitation for all political forces to participate. The door is open for everybody, including the Brotherhood, to participate in the process," Fahmy told reporters.

"If the political landscape does not have space for everyone, it cannot be an inclusive democracy."

Morsi has been formally remanded in custody on suspicion of offences committed when he broke out of prison during the 2011 revolt that toppled former president Hosni Mubarak.

The Islamist leader, who has been held at an undisclosed location since the coup, refused to talk to the investigating judge in a meeting on Friday, said Mostafa Azab of the "Lawyers Against the Coup" movement.

Morsi "refused to talk to him and told him he didn't recognise any of the measures being taken against him," Azab told AFP, adding that the former president had refused to call a lawyer.

Earlier, the interior ministry urged pro-Morsi demonstrators to go home, saying this would allow the Brotherhood to return to politics.

"Your peaceful and safe exit will allow for the return of the Brotherhood to a role in the democratic political process," the ministry said.

But it warned that protesters' "continued presence will expose them to legal action over their involvement in several criminal acts by some in the gatherings, including killing, torture, kidnap, carrying weapons... and incitement to violence".

"Crusaders and secularists and the Americanised army have converged... with Gulf money and American plotting to topple Mohamed Morsi's government," he said in an audio recording posted on jihadist forums.

In his first comments since the coup, Zawahiri also attacked Morsi's secular opposition and Coptic Christians, and called for a mass movement to install Islamic law.

Morsi loyalists staged defiant rallies on Friday, though plans for four evening marches largely fizzled after police dispersed a new sit-in outside the Media Production City in a Cairo suburb.

Police fired tear gas and birdshot at protesters who had set up tents and brick fortifications outside the compound. The protesters responded with stones.

Residents of another Cairo neighbourhood also stopped Morsi loyalists from setting up a new protest site in the Alf Masakan neighbourhood overnight.

Sisi told the Post that he wanted Washington to push for an end to the protests.

He said that police, not the military, would be charged with dispersing the protests, and insisted that millions of Egyptians "are waiting for me to do something" about the sit-ins.

Sisi defended the army's intervention, saying it had prevented a "civil war" but gave an enigmatic answer on the question of whether he would run for president.

"You just can't believe that there are people who don't aspire for authority," he said, when pressed.

"When the people love you -- that is the most important thing for me."