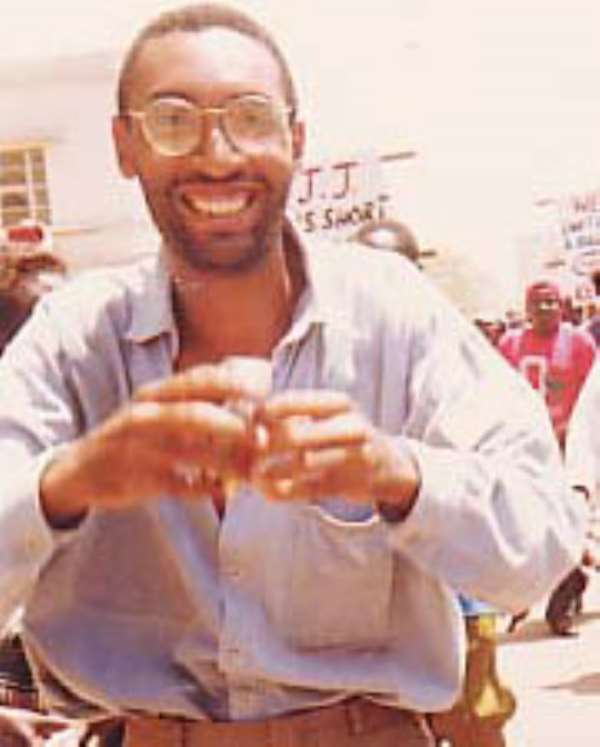 AT LONG LAST the battle for the de-confiscation of the house built for the family of Ghana’s first President, Dr Kwame Nkrumah, has ended, with the return of the house to the Egyptian-born Madam Fathia Nkrumah, her two sons and daughter. The house, located at Cantonment, just behind the St Thomas Aquinas Secondary School, was released to Sekou Nkrumah (pictured), the youngest son of Kwame Nkrumah about six months ago, this paper gathered. Sekou, who is expected from a three-week trip to the United States this weekend, has been living in the house, which is under extensive renovation for the past six months. He is presently the only child of Fathia currently resident in Ghana. His two other siblings, Dr Gamel Nkrumah, a journalist with the Cairo-based biggest Egyptian daily, Al Ahram and sister, Samia Nkrumah, also a correspondent with Al Ahram but based in Italy, are expected to return briefly to Ghana within the next few weeks with their mother, Gye Nyame Concord gathered. Fathia’s house, which was built as a national gift for the family by the military-led regime of the late Ignatius Kutu Acheampong was re-allocated by the former Provisional National Defence Council (PNDC) to the State after the family briefly left Ghana for Egypt. It was at one time the official residence of the country’s penultimate Speaker of Parliament, Mr Daniel Francis Annan, even though Sekou and the family at the time reportedly had no home and had to lodge at hotels whenever they visited the country. In 1998, the then radical Sekou staged a one man demonstration behind the walls of the house to demand the return of the property to the family. Strikingly, the last time Madam Fathia was in Ghana some five years ago to celebrate Ghana’s independence day, she sat next on the podium with the man who was then living in her former residence, without much of a word being exchanged between the two. Further enquiries also show that Sekou has since June 1, this year, been appointed Director of the Dr W. E. B. Du Bois Memorial Centre for Pan African Culture located on the 1st Circular Road, Cantonment-Labone. The centre is dedicated to the memory of Dubois, the first black graduate of Harvard University and one of the brilliant black men ever to grace this universe and closest Pan-African allies of Nkrumah. Speaking in a follow-up interview on the issue, Deputy Minister for Information, Mr. Stephen Asamoah Boateng, said government’s decision to return the property to the family is part of a process of healing the wounds of the past. He explained that government would continue to take the due process to make sure people are not unduly deprived of what they have genuinely acquired over the years. According to him, handing the Nkrumah family’s property to them is in line with government’s policy of building a property owning democracy “and for government to support eminent people who by dint of hard work need to be settled”.
“We have done similar things with other heads of state, including Dr. Busia’s family and it is not strange that government is doing the same thing with Dr. Kwame Nkrumah’s family”.
He could, however, not readily tell the cost of renovation works on the property which he said was in a poor state by the time the State handed it over to the family. The state is however picking up the cost for the renovation works, he explained.