Ghana Police attacked 'VANDALS' of the University of Ghana again!! 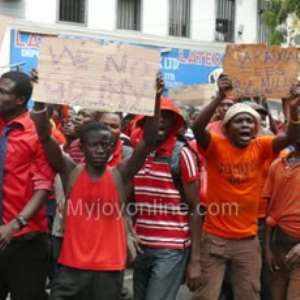 News report via Over 100 UG students arrested for unlawful assembly and several others on 13 April, 2013 that the Ghana Police Service has arrested over hundred Commonwealth Hall students of the University of Ghana for heralding their Hall Week celebration with a public gathering without prior approval from the police service is depressing but not surprising. The Police action is only a rehash of what they did to Vandals of Commonwealth Hall on the 24th March 2007 for the same reasons. My response then, written on 26 March 2007 and published by the Daily Graphic has been reproduced here unedited as appropriate response to the current development.

My heart bleeds and aches with excessive anguish and pain as the unfortunate news of Police brutalities against peaceful and unarmed Vandals trickled in yesterday. It is indeed very disturbing and quiet worrying, how the Police Service, which is suppose to be a lawful state institution charged to ensure the safety of law abiding citizens could be so mean and lawless. Instead of ensuring orderliness the Police rather became an obstruction and stood in the way of peace, public sanity and serenity.

History recalls countless instances where very despicable and unprofessional tendencies of the Ghana Police has led to the death and maiming of innocent citizens in this country. However, the unwarranted and unprovoked attacks of 24th March 2007 on Commonwealth Hall Students is unique in the sense that, it is the first time students who had gone on float to sensitize the public about malaria prevention have been subjected to untold brutality at the hands of the Ghana Police Service. We have every cause to believe that yesterdays attack was premeditated in line with a sworn vendetta of the police against Ghanaian students in general but Commonwealth Students in Particular.

We Vandals wish to make it categorically clear to Government that when law enforcers of the land who decide to be lawless are left to go unpunished under a democratic dispensation, lawful citizens, in this case Vandals, are left with very limited options; the best of which is to defend ourselves. Commonwealth Hall Students shall not allow themselves to be added to the list of senseless police killings as the nation has witnessed in the May 9th stadium Disaster, the Dansoman and Kotobabi cold blooded murders.

Fellow Vandals, let not lose sight of one important fact, that in the face of imminent danger some of our colleagues made the loudest statements with their lives by defying the blazing guns of the Police to the rescue of arrested Vandals. Yesterday the Ghana Police was able to disperse us, bruise our ego and pride, but let this not be misconstrued as cowardice on our part. One fact is certain that, Vandals can always take care of themselves, and we have amply demonstrated this, and once again we shall rise above this gusty storm. We are Vandals and by the power of our minds we shall prevail over all the arms and ammunitions of the Ghana Police Service. If the Police Service took us for a bunch of nonentities it only goes to portray their level of ignorance of the times in which we live.
Vandals, the unfortunate outcome of yesterday's float dubbed “Alhaji” is evocative of the Tsnaman Square gunning down of students in China and the 1948 Christiansburg Castle crossroads shootings.

Last but not the least, Vandals, while we are nursing our physical or psychosomatic injuries and preparing for the next line of action the greatest harm we can do to ourselves is to be oblivious of the significance of this period. I wish you speedy recovery, however, be rest assured that by any means necessary we shall exact justice and vindication.....

Those who bring sunshine into the lives of others, cannot keep it from themselves.