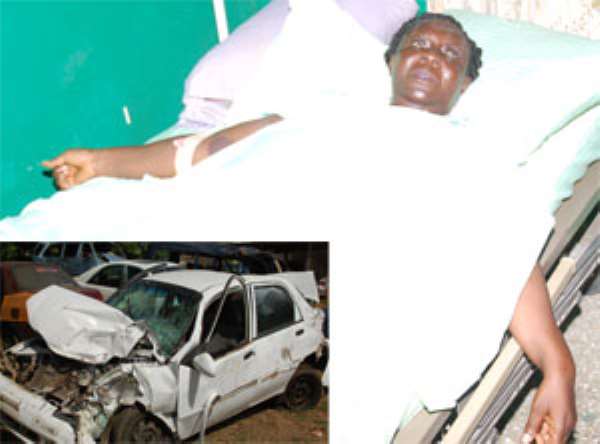 She, together with three persons on board her KIA Avella saloon car registered GS 1869-12 was severely injured after the crash.

They were rushed to the Kwahu Government Hospital at Atibie after holiday makers rescued them from the mangled car.

Susana Mensah had gone to Nkwatia on Easter Saturday as a guest at the Nkwatia Education Committee Inter Junior High Schools Quiz Competition.

She is reported to have left the function to another event within the Kwahu area and was returning to Nkwatia on Sunday at about 1:00 p.m. when the near fatal accident happened.

One of the occupants of her vehicle, Denora Darko, who is said to be in critical condition, has been referred to the Korle Bu Teaching Hospital in Accra for further treatment.

Susana Mensah and the two others are in relatively stable condition and responding to treatment at Atibie.

The Nkawkaw Divisional Commander, ACP Michael Avadetsi, told DAILY GUIDE that 17 vehicles were involved in nine accidents at different locations in Kwahu including that of the former deputy Eastern regional minister during the Easter festivities.

He explained that two were serious but there were no deaths and confirmed the former deputy minister was in stable condition.

In one of the accidents, a pedestrian was knocked down by a vehicle.

Ten persons sustained various degrees of injury.
He said a driver of a Ford mini bus registered GE 2415-10 was driving from Nkwatia towards Mpraeso while Susana Mensah was driving from the opposite direction when the Ford bus driver lost control of his vehicle and rammed into Susana's car causing it to crash into a Nissan Almera taxi with registration number GR 6077-13 which was behind her.

Susana's car was therefore sandwiched between the two vehicles which caused serious damage to the car and injured the four persons on board.

He said no life has been lost yet.
The Ford driver whose name was not readily disclosed as well as the cabbie who sustained minor injuries had since been arrested while the rest were recuperating at Atibie.

Only one of the injured had been referred to Korle-Bu because her condition was critical.