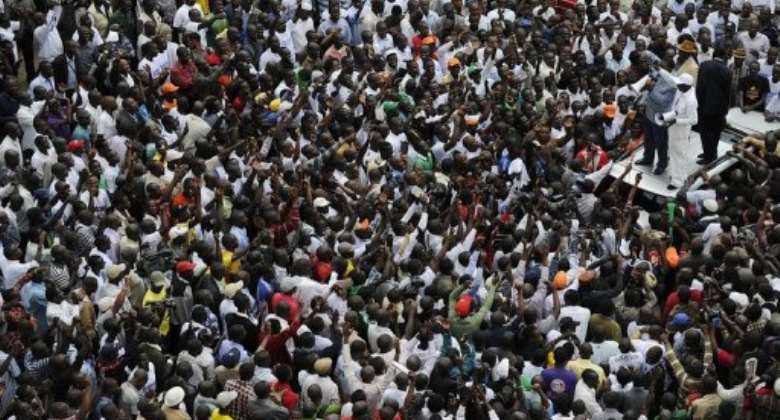 Odinga supporters gather on March 16, 2013, at the supreme court to support a petition challenging the election outcome. By Tony Karumba (AFP/File)

NAIROBI (AFP) - The party of Kenyan president-elect Uhuru Kenyatta on Wednesday accused European Union election monitors of bias in favour of his rival Raila Odinga, claims dismissed by the EU.

Kenyatta's party, The National Alliance (TNA), accused the EU of "overt and active support" for the defeated party of outgoing Prime Minister Raila Odinga, who is challenging the results of the March 4 poll at Kenya's Supreme Court.

"The meddlesome attempts to load the die, in order to guarantee a favourable outcome for a candidate perceived by the EU as more malleable and accommodating, is bound to fail," the TNA party said in a letter.

"This is a neutral and impartial team which never got involved in petition of any side," he told AFP.

A Kenyan daily newspaper, The Star, used its front page on Wednesday to cite an internal EU document citing a "lack of transparency" in the counting of ballots for the presidential election.

Visnovitz refused to comment on the newspaper report, saying only that the EU team's final report would be released at the latest by May 4.

Kenyatta, who avoided a second-round run-off vote by the slimmest of margins, winning with just 50.07 percent, beat Odinga -- his closest rival -- by more than 800,000 votes.

Odinga's Coalition for Reform and Democracy (CORD) claims the poll was marred by irregularities including changes to the voter register and inflated numbers of registered voters.