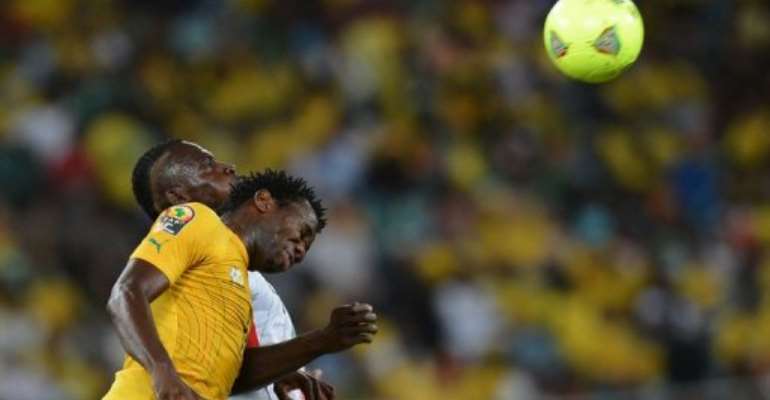 Bongani Khumalo (foreground) heads the ball against Mali in Durban on February 2, 2013. By Francisco Leong (AFP/File)

Goalkeeper Itumeleng Khune, who skippers South African Premiership leaders Kaizer Chiefs, takes over the armband for a March 23 fixture Bafana Bafana (The Boys) must win to have a realistic chance of reaching Brazil.

South Africa dropped four points in the first two rounds last year after 1-1 draws at home to Ethiopia and away to Botswana and are only third in Group A, two points off the pace.

They are replaced by Morgan Gould, Siyanda Xulu, Daylon Claasen, Daine Klate and Dino Ndlovu for the first international meeeting between Bafana Bafana and the Wild Beasts.

"I did not choose Bongani because he has not being playing for his club (PAOK Salonika of Greece)," coach Gordon Igesund told reporters here after naming his squad.

Khumalo did not impress as a defender or leader during a disappointing Cup of Nations for hosts South Africa, who lost a last-eight penalty shootout to Mali after beating Angola and drawing with Cape Verde and Morocco in group games.

Gould, ruled out of the Nations Cup by injury, is among six Chiefs stars in the squad and is the likely replacement for Khumalo, who joined Tottenham Hotspur two years ago and was lent to Preston, Reading and PAOK.

"I did not make too many changes because I believe in continuity. We need to carry on from where we left off in the Cup of Nations tournament," said the coach.

"Central African Republic are a very dangerous team. They are very strong and physical but if we move the ball around and keep it on the ground, we will do well," he promised.

Central African Republic stunned seven-time champions Egypt 4-3 overall in a 2013 Nations Cup qualifier only to be pipped by Burkina Faso for a place at the finals, and are ranked ninth in Africa, two places above South Africa.