GFA is a Mafia Group - MP 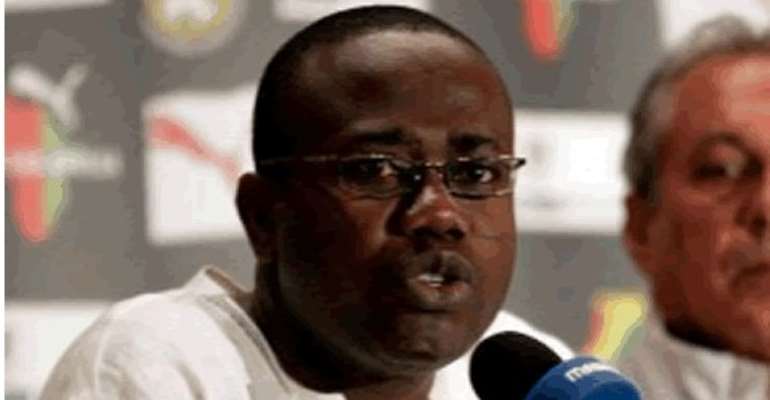 The New Patriotic Party (NPP) Member of Parliament (MP) for Asante Akyem North in the Asante Region, Kwadwo Baah Agyemang, has described the Ghana Football Association (GFA) as being made up of “a bunch of mafia group who are satisfying their own parochial interest.”

The MP told Today that, Ghana football would have reached greater and better heights if certain untoward behaviours of some GFA executive members are curtailed.

He took a swipe at the GFA president, Mr. Akwasi Nyantakyi, whom he said has taken over too many positions in Ghana football adding that “Mr. Nyantakyi must relinquish some of his positions to other persons to hold for he is not the only intelligent person to run Ghana football.”

The MP who is also a member of Sports Writers Association of Ghana (SWAG) blamed the GFA president for Ghana's poor performance in the 2013 African Cup of Nations (AFCON) tournament in South Africa, saying “the GFA management headed by Mr. Nyantakyi manipulated the technical team to the extent of influencing Coach Akwasi Appiah in player selection.”

A trend he said “has gone on for some time but the GFA always turn around to blame the technical team when failures occur.”

According to him, “Mr. Nyantakyi is not a good leader. There are many question marks about him as chairman of the Black Stars management team.”

The MP chided the GFA for suggesting that the technical team of the Black Stars would be augmented after their abysmal show in the 2013 AFCON. According to him, “that means more money to pay more people and that is a financial loss to the country. The GFA spent GH¢300 million in excess of its budget in only the last quarter of 2012, but had nothing good to show for.”

The MP, who is also a media consultant and highly tipped as a ranking member for youth and sports proposed that “the old chips at the GFA are causing problems. Let all Ghanaians check the Black Stars management team. Urgent overhauling is needed there before they finally kill football in Ghana.”

KwasiNyantakyi, GFA President
Hon. BaahAgyemang stressed that, the reason Andre DedeAyew and his younger brother gave as “taking a temporal leave from the black stars is a harsh one and a very big blow to the Black Stars.

“This is the time Ghana needs the Ayews most to augment the team judging from the team's poor performance in the AFCON tournament in South Africa.”

According to him, beneath the temporal resignation letters, the Ayews have detected an orchestration by the GFA to push them out from the Black Stars.

He pointed out two possible reasons why the Ayews were not added to the team. He said “prior to the AFCON 2013, there was a recording to the effect that the GFA, the technical and the management teams of the Black Stars would show AbediAyew Pele where power lies and that the Black Stars can succeed without his children.

“Secondly, it might also be revenge from Coach Akwasi Appiah against Abedi Pele. This is when in Senegal 1992 AFCON, the former's captainship was taken from him and given to the latter on the grounds of AkwasiAppiah's inability to speak French.”

The MP for Asante Akyem North noted that the Black Stars could have easily won the 2013 AFCON in South Africa if the coach had added the Ayew brothers and other experienced players who are in top form to the team.

He said the reasons the coach gave in excluding the Ayews were “unjustifiable.” saying, “The coach's reason that Jordan was not called because of football reasons was flimsy. Also Dede's exclusion from the team because he said he could not arrive in camp on the day he was asked to, but a day later was also unconvincing.”

He cited the days when Abedi Pele was flown from Europe to camp in a chartered flight few days to a match to buttress his point.

“The GFA must know that God blessed every individual with special talents, thus trying to settle scores with the Ayews or any good player is detrimental to the whole country.” he advised.

“The coach must also know that all the players do not come from the same background. Some of them are the street boys and the coach should know how to handle them.” the MP concluded.