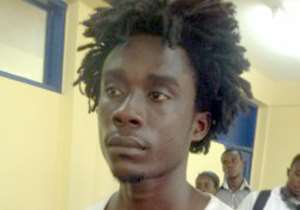 A 27-year-old fetish priest, Kwabena Oduro, who allegedly murdered two students at Kwahu Atwedie near Nkawkaw in the Eastern Region, has been remanded by the Nkawkaw magistrate court on a holding charge of murder.

The police have reportedly gathered more evidence against the accused person.

The Eastern Regional Police Public Relations officer, ASP Yaw Nketiah-Yeboah, said the accused person's mother had returned three phones allegedly belonging to the victims, to the police. Michael Ofori Agyapong, 21, a student of Kwahu Ridge Secondary School at Obo Kwahu and Joseph Nyame were brutally butchered to death by the accused person while Kwadwo Anane, 21, a student of Ngleshie Amanfrom Secondary School in Accra, is receiving treatment at the Komfo Anokye Teaching Hospital in Kumasi due to severe wounds inflicted on him by the accused person.

The accused will re-appear before the magistrate court on Friday, March 15, 2013.

Briefing the media in Koforidua after the arrest last week, Assistant Commissioner of Police (ACP) James Abass Abaah, Deputy Regional Police Commander, narrated that Oduro, also known as 'Efo', asked the students to bring some amount of money for him to double it for them.

The students then visited Efo at his shrine at Atwedie with an amount of GH¢1,800, a laptop computer and some other items.

ACP Abaah said when the students arrived at the shrine, the fetish priest took them to a nearby bush and prepared some concoction for them to drink, telling them it would fortify them, 'but they however felt drowsy and finally fell unconscious.'

He said the priest then butchered the students and bolted with their money, the laptop and the other materials and went into hiding at Ziope, a town in the Volta Region.

According to the Deputy Commander, the police were hinted about the incident and they rushed to the place, only to meet two of the boys dead, with Anane still alive.

He said they rushed Anane to Komfo Anokye Teaching Hospital and mounted a search for Efo, whom they arrested and retrieved all the items from.

The bodies of the two had since been deposited at the Atibie Hospital at Nkawkaw pending autopsy.