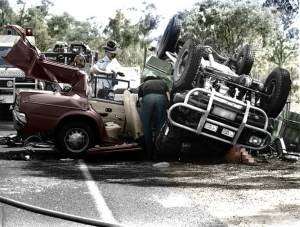 ASP Lumor said the rear tyre burst about two kilometres away from Apam Junction and as a result the driver lost control and veered into the lane of a Mercedes Benz Sprinter with registration number GE 3969-12 which was coming from Accra to Takoradi.

He said nine of the people who were seriously injured were taken to Apam St Luke Catholic Hospital where one died on arrival while one of the two others who were sent to Winneba Hospital also died.

The Police Commander said only two of the victims had so far been identified as Yahya Adams, driver of the Hyundai bus and Osman Abubakar a Police Constable stationed at Apam.