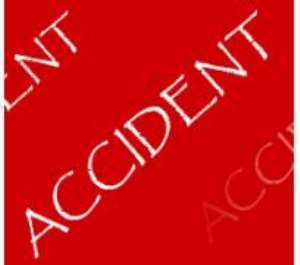 Winneba (C/R), Feb. 23,.GNA - Eleven people died on the spot and seven others sustained injuries when a 207 Benz Bus on which they were traveling for a funeral collided with a heavy duty tipper truck at Gomoa Mampong, near Okyere, on the Winneba-Accra road in the Central Region, on Saturday.

The Winneba Municipal Commander of the Motor Traffic and Transport Unit (MTTU) of the Ghana Police Service, Assistant Superintendent of Police (ASP) John Paul Akande, confirmed the tragedy to journalists at Winneba.

He said the injured, five males, including a seven-year old boy, and two women, were receiving treatment at the Winneba District Trauma and Specialist Hospital.

ASP Akande said bodies of four males and seven females yet to be identified had been deposited at the mortuary of the same hospital.

He  said it took a combined team of police, fire service officials and the ambulance service personnel about four hours to remove dead persons and survivors from the bus that got stuck under the tipper truck.

ASP Akande  said the cause of the accident was yet to be established by the police, who were investigating it.