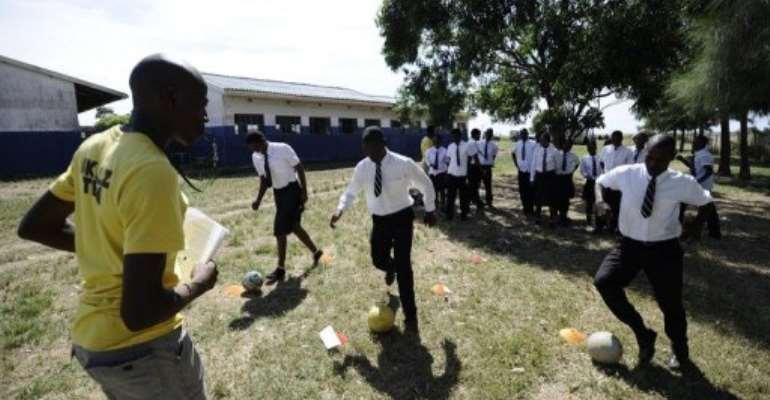 A health educator (L) delivers prevention messages on HIV and AIDS on March 8, 2011, at a high school in KwaZulu-Natal. By Stephane de Sakutin (AFP/File)

PARIS (AFP) - Distributing antiretroviral drugs in the South African province worst hit by AIDS boosted average life expectancy there by more than 11 years, according to research reported on Thursday.

In 2003 -- a year before anti-HIV drugs started to become available in the public-sector health system -- adult life expectancy in KwaZulu-Natal province was a mere 49.2 years, United States and South African experts found.

In just eight years, the drugs scaleup all but wiped out a slump in life expectancy that began in the 1990s as the AIDS pandemic took hold, they estimated.

"This is one of the most rapid life-expectancy gains in the history of public health," said Till Baernighausen of the Harvard School of Public Health and Population, who took part in the probe.

The study, published in the US journal Science, looked at the incidence of births and deaths among 101,000 people living in a 434-square-kilometre (167-square-mile) area of rural KwaZulu-Natal.

The area is one of the poorest districts of South Africa, which has the highest tally of HIV-infected people in the world.

In this community, said the study, 29 percent of adults have HIV. Among 30- to 49-year-olds, about half of the women and a third of the men have the AIDS virus.

In 2003, more than half the deaths in the district were attributed to HIV.

After public health care provided access to antiretroviral treatment (ART), adult mortality from all causes, including AIDS, fell by more than half.

By 2011, a third of all HIV-infected people in the area aged 15 and older were taking the life-extending drugs.

The study also declared there was sound evidence that ART was not just a lifeline but also cost-effective.

After factoring in other expenses, this works out to a cost of $1,593 per life year saved, "less than a quarter of South Africa's 2011 per-capita gross national income."

In general, public health watchdogs consider that any working policy that costs less than a country's per capita income is a good deal, said the study.

Previous research found that widespread distribution of ART to infected people slows down the spread of HIV in the community.

The drugs are not a cure. But when used correctly, they reduce infection to low levels, thus reducing the risk of transmitting the virus to others.

Under the former presidency of Thabo Mbeki, South Africa refused to roll out state sponsored AIDS drugs. The treatment was so expensive that it was only accessible to the well-heeled.

The country now has the largest anti-retroviral programme in the world, serving 1.7 million of its 5.6 million HIV-positive people.