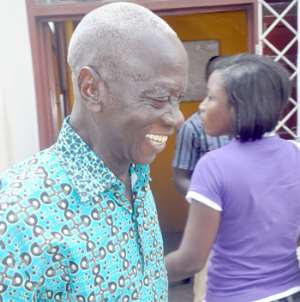 Hundreds of thousands of election officers are up-in-arms against the Electoral Commission (EC) for non-payment of allowances for services rendered to the election regulator during the December 7, 2012 general elections.

After almost three months of total neglect by the EC, several of the aggrieved officers have become desperate and are venting their frustrations through media houses. Some have made several fruitless direct appeals to the EC, DAILY GUIDE gathered.

Recently, the intensity of the agitations forced the EC to publicly call for a ceasefire as it appealed to the officers to exercise restraint while it made efforts to settle the outstanding payment.

The EC however failed to give a clear timeframe for this settlement. 'I cannot put any date on it at the moment.

The finance department of the Commission is working on it very hard to secure a release so that the money would be paid to them,' the Acting Director of Public Relations of the EC, Christian Owusu-Parry, told DAILY GUIDE in a telephone conversation yesterday.

'We need our money, it is nothing though, but we have rendered services and we need to be paid for it,' a Presiding Officer (name withheld) at a polling station in the Ablekuma North area of Accra told DAILY GUIDE in anger.

According to her, the temporary electoral officers had been calling EC coordinators for update on the payment, but they kept giving them the same excuse. 'It seems like they [EC] are not serious about paying us. It's like they are playing with us,' the Presiding Officer fumed.

The EC would have to cough out the outstanding arrears to settle over 150,000 officers who were recruited temporarily to man the over 26,000 polling stations nationwide.

On the average, the EC employed the services of six officials per polling station during the election period. The officials at each polling station included a Presiding Officer, Returning Officer, Polling station Assistants and Biometric Verification Officers. 'We owe all these people…they are in excess of 100,000 people,' the EC public relations director confirmed to DAILY GUIDE.

The EC is expected to settle an average of GH¢100.00 of outstanding payment to the various categories of officials. Essentially, the EC would have to cough out GH¢10 million to get the angry officials off its back.

Reminiscence
This is not the first time the EC is faced with serious agitations from officers for arrears it failed to pay within the agreed contract term. In April last year, when the 40-day long biometric registration exercise was concluded, the EC was hit with an avalanche of complaints for non-payment.

At the time, registration supervisors and their deputies were paid an average of GH¢450 per month. The EC and the thousands of aggrieved officers dragged the issue for several weeks before the funds were finally released.

Even at the point of payment, the EC altered the original term of agreement. A Registration Supervisor (RS) and their Deputy was to be paid GH¢500.00 and GH¢400.00 per month for three months respectively, however, all other officials including the laminators, technicians, public educators and street announcers who thought they were also going to be paid within the three-month timeframe were disappointed when the EC decided to pay them a bulk sum for just the 40-day service they rendered.