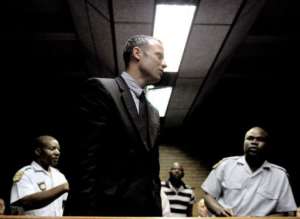 JOHANNESBURG (AFP) - Oscar Pistorius's uncle on Saturday said the jailed track star was "numb with shock" and grief following the death of his model girlfriend Reeva Steenkamp, whom the sprinter has denied murdering.

Giving the strongest indication yet that the athlete plans to plead not guilty to shooting the 29-year-old blonde model, Arnold Pistorius in a statement strongly refuted "any possibility of a premeditated murder or indeed any murder at all."

"We are all grieving for Reeva, her family and her friends. Oscar -- as you can imagine -- is also numb with shock as well as grief," the uncle's statement said.

"As a family we are trying to be strong and supportive to Oscar as any close family would be in these dreadful circumstances."

The track star faces a life sentence if convicted of premeditated murder, as alleged by state prosecutors.

"We have no doubt there is no substance to the allegation and that the State's own case, including its own forensic evidence, strongly refutes any possibility of a premeditated murder or indeed any murder at all," Arnold Pistorius said.

#EndSARS: Rawlings Urge Nigerians To Use Non-Violent Engagem...
11 minutes ago