Tunisia PM in last-ditch bid to save government 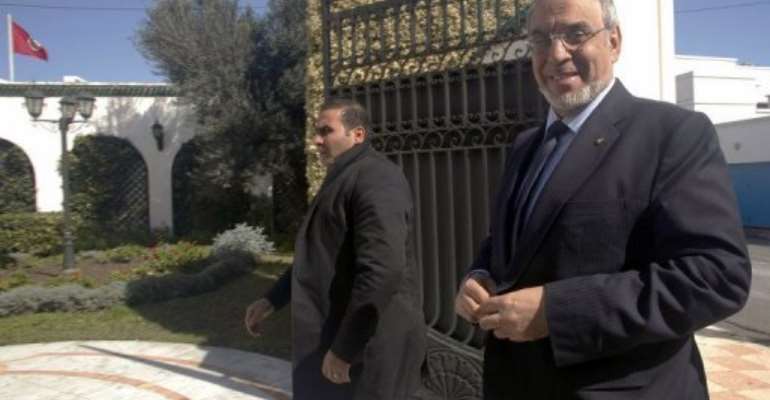 TUNIS (AFP) - Prime Minister Hamadi Jebali was Friday consulting with a raft of party leaders as he hammered out a government of technocrats designed to pull Tunisia out of its worst political crisis since the revolution.

Jebali has promised to announce the new government on Saturday and says he will resign if it is rejected by the National Constituent Assembly, which is dominated by his own Islamist Ennahda party.

The prime minister announced his intention to form an apolitical government after Tunisia was plunged into political turmoil on February 6 when prominent leftist leader Chokri Belaid was assassinated outside his home in a Tunis suburb.

The plan has been met with resistance by the Ennahda but has won support from a number of secular parties.

The Islamists have joined ranks with President Moncef Marzouki's centre-left Congress for the Republic Party, and two other parties, in proposing that the new cabinet comprise both politicians and independents.

Jebali was expected to meet the party leaders from 1500 GMT Friday at the Carthage palace in a Tunis suburb.

"On Saturday I will announce the new government line-up and if it is rejected I will submit my resignation to the president," Jebali told reporters on Thursday.

"Tomorrow ... (Friday) I will meet all the parties who have, or have not, accepted this initiative," he added.

The prime minister is sticking to his guns that the criteria for inclusion in the new cabinet is non-partisanship as well as a firm commitment by future ministers not to run in the next elections.

"This is the proposal I am making for the country, and the parties will be held responsible for its success or failure," he said.

"The parties must realise that there can be no bargaining for this initiative to go through. They can, however, present their opinion which is normal in a democracy."

Tunisia's media on Friday said the country was witnessing a "turning point", while urging a resolution of the impasse.

"Our hope is that the voice of reason and consensus will emerge triumphant," said the La Presse.

The Arabic daily Essabah said Jebali's "courageous" move if successful could "redraw the political map of the country and redefine its priorities".

Most of the secular parties backing the initiative are in the ranks of the opposition but Ettakatol, a secular ally of Ennahda headed by parliamentary speaker Mustapha Ben Jaafar, has also thrown its weight behind Jebali.

Both the powerful General Union of Tunisian Workers and the union of employers UTICA have also expressed support for the initiative, seeing in it a way to emerge from the crisis.

But hardliners of Ennahda -- which controls 89 of the 217 seats in the National Constituent Assembly after an October 2011 election -- refuse to give up key portfolios.

One of Ennahda's vice presidents, Mohamed Akrout, urged party backers to join a public rally in Tunis on Saturday in support of the Islamists.

"Supporters of Ennahda must defend their revolution and the interests of the people," Akrout said in a video posted on the party's Facebook page.

The killing of Belaid has enflamed tensions between liberals and Islamists over the direction of the once proudly secular Muslim nation, with opposition protesters engaging in street clashes with police.

There is also deadlock over the drafting of the constitution, 15 months after the election of the assembly, and the country has been further destabilised by the rise of Salafists, accused of deadly attacks.

Poverty and unemployment, two key factors that led to the revolution that ousted Zine El Abidine Ben Ali in 2011, continue to grip the country.

As well as the pro-Ennahda rally, Saturday will see two memorial ceremonies for Belaid, one in southern Tunis and another in Jendouba in the northwest, from where his family originates.