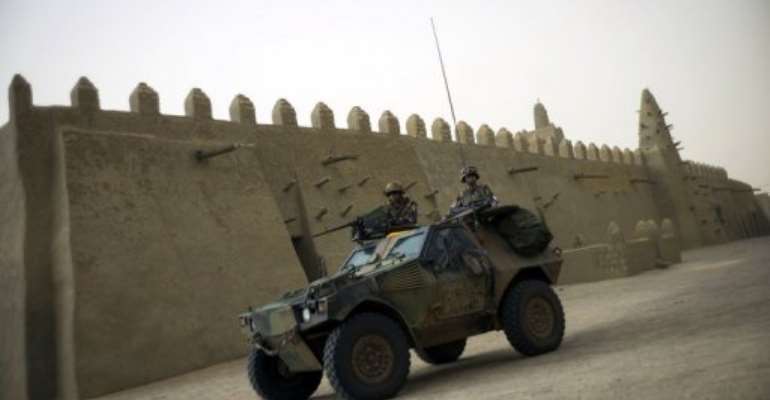 French soldiers patrol in an armoured vehicle next to the Djingareyber mosque, on January 31, 2013 in Timbuktu. By Fred Dufour (AFP/File)

LONDON (AFP) - A document left behind in the bombed remains of an Al-Qaeda training headquarters in the Malian city of Timbuktu gives a rare insight into the organisation's thinking, a British newspaper reported Thursday.

The Daily Telegraph said it had found the Arabic-language document outside a building bombed by French forces who drove the Islamists from the ancient city.

The newspaper said the document was the first page of minutes from the 33rd meeting of the Al-Qaeda in the Islamic Maghreb (AQIM) leadership, held on March 18, 2012.

The AQIM chiefs discussed a plan to capitalise on the gains made in northern Mali by the Islamist rebel group Ansar Dine and Tuareg minority rebels. It was suggested that AQIM pushed aside the groups and took control.

At the time of the meeting, those groups had just captured a string of towns in the Sahara Desert on Mali's northern border with Algeria.

Abou Moussab Abdel Wadoud -- a 42-year-old Algerian dubbed the "prince" of AQIM, who helped found the group in 2006 -- chaired the meeting in which he outlined a "proposal and a vision for the future".

He is recorded as saying: "We have looked carefully into it and have found it interesting and satisfactory for this period of time, therefore we thought we would present it for you to discuss and give it careful consideration".

The plan was to praise Ansar Dine for its "victories during the latest encounters which have been carried out by our Muslim heroes on this grand desert".

But then AQIM intended to move in and take over the cities they had gained.

"We had to think of the necessity to draw a plan to command and control the jihad activities there at this critical moment and target all efforts to achieve the required goals," the document said.

Within the following two weeks, Alsar Dine and the Tuareg rebels seized Timbuktu, Kidal and Gao, the three main cities in northern Mali.

As per the plan in the document, AQIM then muscled in and took de facto control over much of the north, including arms dumps, airports and training facilities. They were dislodged by French forces who came to the Malian army's aid.

They are "to ally with other political movements in order to hijack them; to fight guerrilla wars for disputed territory, and to build up a new caliphate that will extend across the Middle East and far beyond," he wrote in the Telegraph.

The document came from the old headquarters of the Gendarmerie Nationale paramilitary unit, which AQIM used as a training centre. Recruits were drilled and indoctrinated there until French forces destroyed the building.