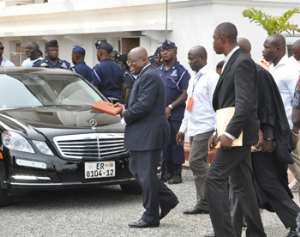 The Supreme Court has unanimously ruled that parties involved in the petition challenging the declaration of John Dramani Mahama as President by the Electoral Commission (EC) in the December 7 and 8, 2012 general election, should share documents.

The nine-member panel therefore ordered the petitioners, the New Patriotic Party (NPP) presidential candidate, Nana Addo Dankwa Akufo-Addo, his running mate Dr. Mahamudu Bawumia and the party's National Chairman Jake Otanka Obetsebi-Lamptey to furnish the respondents- President John Mahama and the EC- with details of all the 4,709 polling stations where the petitioners were alleging irregularities.

The panel, chaired by Justice William Atuguba, again ordered the EC to also furnish the petitioners with particulars of Ghanaians serving abroad including foreign service officials, students on government scholarships abroad, Ghanaians working in international organizations and security service personnel returning on duties and the mode of registration.

Court's Orders
The court ordered that all the parties have seven days from the date of the court's sitting (yesterday) within which to comply with the ruling.

The court's consolidated ruling in respect of the three applications was read by Justice Sulley N. Gbadegbe.

He said that since the stakes in the case were high, the court had an obligation to ensure that all the parties had adequate information to rely on.

Granting the applications of the EC and President Mahama, the court held that 'it is fair for those who raised the allegations to provide further and better particulars to assist the court in resolving the petition.'

Allowing the petitioners' interrogatories, the court again held that the answers given by the EC to the petition 'lacked specificity in relation to the number of voters registered abroad.'

When Justice Gbadegbe completed reading the ruling, Justice Atuguba took the floor to issue the orders 'we have adopted as stated in the statements of the applicants'.

In respect of the EC, the court held that the petitioners should supply the commission with paragraphs A, C, D, E, F of their grounds and paragraph 20 of the petition.

Turning to the EC, the court said, 'Let the 2 nd respondent answer the petitioners all the grounds set out in the petitioner's application for interrogatories.'

When the court had finished announcing its ruling, the petitioners' motion seeking leave of the court to amend its petition to enable them to add more information to the petition was called.

He said the NDC filed the preliminary objection because the court's registry received the petitioners' application at 9:20am on 31 st January and filed a notice for withdrawal at 3:45pm before filing another application on the same subject-matter five minutes later at 3:50pm.

'They indicated that they were withdrawing it and seeking leave to amend the amended petition with liberty to re-apply but it is an abuse of the court's process,' counsel argued.

Mr. Tsikata's argument was that since the petitioners filed a notice for withdrawal, they (petitioners) also needed to seek leave of the court before filing the current application, saying, 'Our preliminary objection is in respect to that application filed at 3:50pm.'

He said that the notice of withdrawal filed without leave was 'improper,' adding that 'the reason why leave is required is simply that the courts are seized with this petition.'

Mr. Tsikata argued that 'if it was sought to withdraw an interlocutory application, that process requires leave.'

He said that the key objective of the nature of the petition is that 'the court controls its processes,' adding, 'It is not for a party to dictate the process by which they come before the court.'

He argued that 'leave is not automatic in relation to this petition,' adding that 'they basically made up their rules. In the morning, they file an application and when they are a little bit awake, they withdraw and file another one. The court should not countenance these kinds of behaviours.'

At this point, Justice Jones Dotse cut in to repeat the bench's admonishing that the bar needed to be decorous in their statements and Mr. Tsikata said he was withdrawing his 'a little bit awake' comment.

According to Mr. Tsikata, a party could not start a process, change their minds without informing the court, before filing once again and said that C.I. 74 is specific on how things should be done, adding, 'Order 17 Rule 2 (1) frowns on what they have done.

'Even if that motion for withdrawal were effective as at the time when it was filed, then without obtaining the liberty to re-apply, they cannot come before the court with an application in exactly the same terms.'

Addison Replies Tsikata
Reacting, Mr. Addison said they noticed an error on the first application and filed a corrected application at 3:50pm, saying, 'Both had a return date of February 5.'

He said as at the time of filing the application, there were no response from the respondents and the petitioners were still in control of the process.

He said it was wrong for Mr. Tsikata to argue that the petitioners were abusing the court's process when it was within their rights to withdraw and re-file the application since the respondents had not filed any responses.

Citing authorities, Mr. Addison said, 'We are not dealing with the withdrawal of the petition but this is a simple application.'

He noted that there was no need to seek leave of the court before re-filing the application because at that time, the petitioners were in total control of the process.

The court then went on break to decide on the objection and when the judges returned, they unanimously overruled the objection and Justice Atuguba said Mr. Addison could proceed with the application on its merits.

He said there were several issues raised in the amended statement which needed answers from them.

The court subsequently adjourned the proceedings until February 7 for the NDC to file its affidavit in opposition so that the petitioners could move the motion.

After this, Mr. Tsikata told the court that the NDC had an 'application for further and better particulars' from the petitions, awaiting hearing.

He proposed to the court that the orders made earlier in respect of similar applications by President Mahama and the EC, be replicated, but added that the petitioners had opposed their application and for that matter he needed to move the application.

He said he would ask the court to order the petitioners to specify the violations in one of their paragraphs opposing the NDC's application.

Justice Gbadegbe then asked Mr. Tsikata if he intended to withdraw the application, judging from the fact that the court's ruling on similar applications had been made.

Justice Doste also asked Mr. Tsikata to get the earlier order made by the court with regard to similar applications to enable him to narrow down the issues if he (counsel) intended to proceed with the application.

Mr. Tsikata told the panel that the NDC was not withdrawing the application and would move it.

Mr. Addison then cut in to say that if similar 'further and better particulars' was what the NDC wanted, the court had already given the orders and they could follow the direction.

The court again adjourned the proceedings until February 7, for the NDC to move its 'application for further and better particulars'.

Mahama's Application for Interrogatories
Afterwards, Tony Lithur, counsel for President Mahama, also wanted to move an application that is seeking leave to serve the petitioners with interrogatories within the terms of the exhibits before the court.

Mr. Addison cut in to say that per the court's ruling for the parties to share documents, 'there is much common grounds.'

'Some of the issues you are asking them to serve have been taken care of by the applications for further and better particulars. They need the court's order to study where they think they should respond,' counsel submitted.

Finally, the petitioners moved an application asking the court to order the EC to produce documents for inspection and to make copies.

According to the petitioners, they needed the Result Collation Forms from all the 275 collation centres as well as pink sheets of all the 26,002 polling stations to further make a case.

Mr. Addison said that they were making the request because of the answers given by the EC in respect to the petition, adding that the documents being requested 'are public records in the official custody of the EC.'

He argued that under Article 21of the Constitution, the petitioners are entitled to request and make copies thereof.

He said that the application could be brought at anytime of the case, adding that 'we have brought it at the earliest opportunity.'

He said that the EC gave the document on request to all the political parties that contested the election and the petitioners' party had copies and could not turn around to demand it again.

'They have all the documents that they are asking us to supply them. They are on a fishing expedition and most importantly, deep sea fishing.'

The EC counsel argued that provisions of copies was not a mere practice but it was required by law and cited Regulation 36 (2) (3b) of Public Elections 2012 of C.I 75 as setting out the rules.

He also cited Regulation 40 of C.I 75 as addressing what takes place at the collation centres, after which every party representative was given copies of what had transpired.

He said that the burden of proof was on the petitioners to establish the allegations and described the request as 'oppressive.'

Addison Comes Again
Replying on point of law, Mr. Addison argued that 'we have a constitutional right to access public records in the custody of the EC. What we are seeking to do is in Order 21 Rule 1.'

The court again adjourned the application until February 7 for ruling on whether or not the EC should supply the petitioners with the result collation forms as well as the pink sheets.