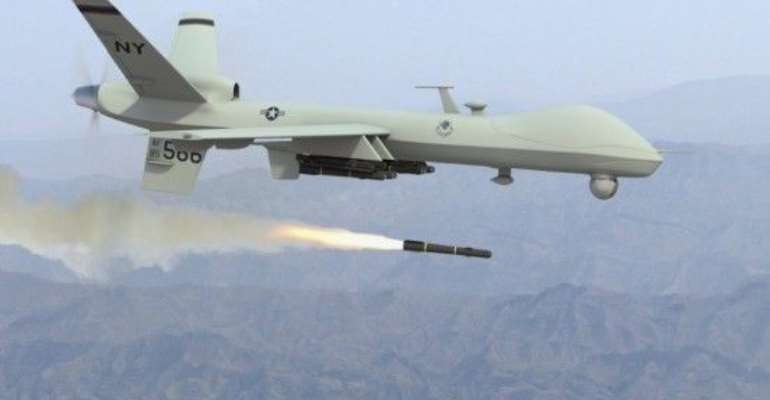 Did you know that the US “already operates” Predator drone aircraft, used for surveillance and bombing targets, in Burkina Faso? I didn't know either. The secret became public only because the US has just signed an agreement with Niger to station some drones in that country too!

The arrival of the drones in West African skies puts a completely new vista on the coup d'etat that took place in Mali on 21 March 2012. It was Captain Sanogo's action in overthrowing the government of President Amadou Toumani Toure that triggered the Tuareg uprising in northern Mali.

The Tuareg rebellion was not new in any sense of the word because the nomadic and fiercely independent-minded Tuaregs have been fighting not only against the government of Mali but other governments in the Sahara region, since independence was granted to the new countries in the region in 1960. What was new was that the Tuaregs were joined by Islamist militants, mostly from Libya, who later hijacked the rebellion almost completely.

The “hijackers” soon began to enforce extreme forms of Sharia (or Islamic Law) which so horrified the northern Mali population that when the French felt obliged to intervene to drive out the Islamist militants, the French were welcomed by the populace. Not only that – ECOWAS troops, including some from Ghana, are to join the French in keeping he peace in Mali, and may eventually replace the French.

It may be said that an unexpected consequence of the crisis in Malia nd the new control exercised over the region by America;s ally, France, has been the arrival in West African skies of American drones in Burkina Faso and npw Niger, and (one expects) also Mali, as soon as the situation there has been stabilised by the French and ECOWAS troops.

A report in the London Guardian newspaper says that the US government appears to be opening “a new front” in its worldwide “war on terror” against Islamist militants by planning a new base for surveillance drones in Niger.

"American forces are already assisting a French offensive in neighbouring Mali”, says the paper, and on 28 January 2013, “the US signed a military agreement with Niger that paves the way legally for US forces to operate on [Niger] soil, prompting a series of reports that the Pentagon was keen on opening a new drones base there.

“That news appeared to be confirmed by Niger government sources, who said the US ambassador in Niamey, Bisa Williams, had asked Niger's president, Mahamadou Issoufou, for permission to use surveillance drones and had been granted it. 'Niger has given the green light to accepting American surveillance drones on its soil to improve the collection of intelligence on Islamist movements' a Niger government source told Reuters.

“In Washington a diplomatic source told the Guardian that the recently signed deal, known as a 'status of forces' agreement, was very broad. 'There are no constraints to military-to-military co-operation within the agreement,' the source said.”

The newspaper describes the US move as “the latest in a gradual expansion of American surveillance drones in Africa, which have so far been operated from Burkina Faso, Ethiopia and Djibouti in the Horn of Africa.”

However, the Guardian points out, “the use of drones, even if just on surveillance missions, is controversial. American drone strikes have been used to deadly effect in countries such as Pakistan, Yemen, Afghanistan and Somalia but have caused outrage among civil liberties groups over the secrecy that surrounds their operation and the high incidence of civilian casualties.

“The London-based Bureau of Investigative Journalism has monitored American drone strikes all around the world and calculates that in Pakistan alone there have been some 362 strikes since 2004. They are estimated to have killed up to 3,461 suspected militants in the country and as many as 891 civilians.”

This is why some political experts regard drones as an “own-goal” that America score against itself. For if, for every 4 militants who are assassinated by drone, one civilian is killed (as the figures above appear to suggest the militant/civilian ratio to be) and each civilian killed is mourned by at least 20 others, then the US is obviously increasing its enemies around the world in geometric proportions.

The rate of increase in resentment against the US is probably even higher, because in developing countries where social systems are largely 'traditional', people who die in tragic circumstances – such as the raining down of bombs on them by a “devil” of a very powerful country-- would be mourned by whole communities of villages and clusters of villages and not by the 20 or 40 people that might be expected to turn up at a funeral held in a city or town. And the gossip would inevitably revolve around the US and its sympathisers, who would be marked down for revenge. Wasn't it the US that invented the term “winning hearts and minds” as a necessary part of the armoury to be deployed in counter-insurgency campaigns?

Indeed, the implications of the war by drone system which the US is perfecting around the globe are so scary that one American writer, Naomi Klein, strongly believes the system is inexorably leading the US down the path of “fascism”, no less. She uses as her point of departure. the film, Secret Wars, which premiered recently. The film is an important narrative of excesses in the global "war on terror", and is also “a record of something scary for those of us at home “. It uncovers “the biggest story, I would say, in our nation's contemporary history," writes Klein..”

According to Naomi Klein, what the film uncovers are the facts behind “a new unaccountable power in America and the world. that has the potential to shape domestic and international events in an unprecedented way. The film tracks the Joint Special Operations Command (JSoc), a network of highly-trained, completely unaccountable US assassins, armed with ever-expanding "kill lists". It was JSoc that ran the operation behind the Navy Seal team six that killed [Osama] bin Laden...

[The film also tracks] “this new model of US warfare that strikes at civilians and insurgents alike - in 70 countries. [The film-makers] interview former JSoc assassins, who are shell-shocked at how the "kill lists" they are given keep expanding, even as they eliminate more and more people. Our conventional forces are subject to international laws of war: they are accountable for crimes in courts martial; and they run according to a clear chain of command....

“JSoc morphs the secretive, unaccountable mercenary model of private military contracting, which [anauthor called ] Scahill identified in Blackwater: The Rise of the World's Most Powerful Mercenary Army, into a hybrid with the firepower and intelligence backup of our full state resources”.

Jsoc, Naomi Klein reports, “operates outside the traditional chain of command; it reports directly to the president of the United States. In the words of Wired magazine:"JSoc operates with practically no accountability.... Its budget, which may be in the billions, is secret. What does it mean for the president to have an unaccountable paramilitary force, which can assassinate anyone anywhere in the world?”

Naomi Klein adds: “This arrangement - where death squads roam under the sole control of the executive - is one definition of dictatorship. It now has the potential to threaten critics of the US anywhere in the world.”

America;s allies, like Britain, are also beginning to feel the pinch of US power. According to the New York Times, “The death of Malik Daud Khan, a Pakistani tribal elder, in a C.I.A. drone strike, might have remained widely unremarked upon, lost amid thousands of others analysts have tallied in the American drone campaign, had not the British courts been brought into it. The drone strike, which killed Mr. Khan and dozens of others at a tribal council meeting in North Waziristan in 2011, [has] spawned a lawsuit that accuses British officials of becoming “secondary parties to murder” by passing intelligence to American officials that was later used in drone strikes. The case has put a spotlight on international intelligence-sharing agreements that have long been praised by officials as vital links in the global fight against terrorist groups, but that rights advocates criticize as a way for Britain and other European countries to reap the benefits of the contentious drone program without its political costs.

“Judges in Britain have yet to decide whether to hear the case, brought forward by Mr. Khan's son, Noor Khan, a British citizen. (They initially declined, but are considering an appeal that was lodged in January.) It has caused a particular sensation, though, because it raises the prospect of legal liability for European officials by linking them to an American drone campaign that is widely seen as publicly unpalatable, or simply illegal, in their home countries.”

We’re Investing Massively In Infrastructure; Not Rearing Fly...
7 minutes ago

Mahama Shakes Tarkwa As Menzgold Customers Give Him Rousing ...
7 minutes ago