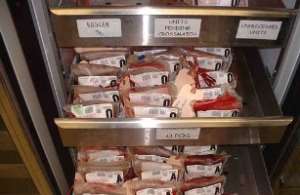 Koforidua, Feb 01, GNA -There is no unit of blood left at the Koforidua Regional Hospital at the moment, apart from a 40-unit replacement blood which is waiting to be used on in-patients whose relatives donated.

Organizations, including churches in Koforidua, seem to be 'showing' the hospital by shying away from encouraging their members to donate blood voluntarily despite several appeals made by the hospital administration.

'Many letters have been written and negotiations made to churches and other organizations to organize a blood donation exercise but they only give unfulfilled promises,' Mr Peter Boateng, Head of Administration, told the GNA in an interview.

He said he was sad that senior high schools, which are the only source of voluntary blood donation, no longer seem to be helpful due to reduction in the entry age of the students.

'The only base that helps us is dwindling due to current age entry; one must be 17 years and above to be able to donate blood, but now an average of 15-year olds are being admitted into senior high school,' Mr Boatend said.

He said this means students could qualify to donate blood when they are in their final year and they will be reluctant to voluntarily donate because they will be preparing to write their final examinations.

Mr Boateng said the hospital is banging its hopes now on organizations and churches, 'else if someone, who needs blood, is rushed now to the hospital without a relative or with a relative who is unfit to donate blood, then God will have to descend.'

When GNA visited the blood bank Mr Phanuel Mordzifa, the Eastern Regional Blood Donation Organizer, said the hospital daily received only 10 units of blood as against 20 units which are issued out to the wards every day.

He expressed worry that hospitals in Ghana only depend on adolescents for blood when, in fact, it is the adults who should be more willing to voluntarily donate blood.

'Because it is the adults who contract all kinds of serious sicknesses and for that matter will need more blood transfusion to survive,' he said.

He said it was high time organizations embarked on an exercise to educate and encourage their members to visit the hospitals to voluntarily donate blood.