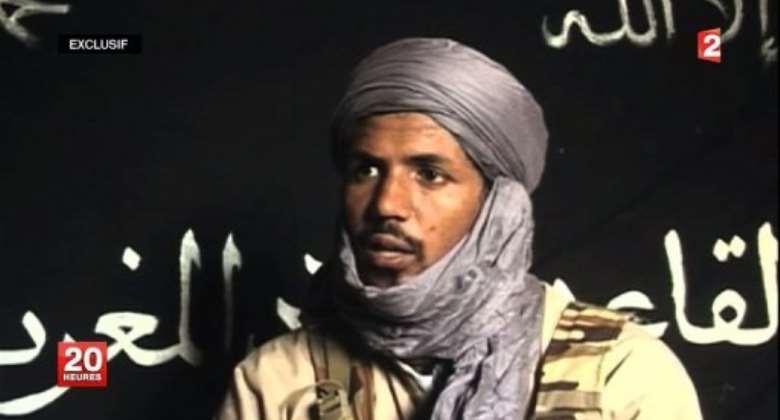 A spokesperson for Al-Qaeda in the Islamic Maghreb, which is holding western hostages. By - (AFP/France 2/File)

NOUAKCHOTT (AFP) - Any attempt to oust Islamists controlling northern Mali by military force would be a death warrant for French hostages held by the north African branch of Al-Qaeda, a top official in the group warned Saturday.

Yahya Abou El Hamame, recently appointed the new "emir of the Sahel" by the head of Al-Qaeda in the Islamic Maghreb (AQIM), attacked French President Francois Hollande's support for international military intervention in Mali, in an interview with Mauritania's private Nouakchott News Agency.

"I want to tell the families of the hostages that the choice of war apparently made by Mr Hollande will inevitably mean that he has signed the death warrant of the French hostages," he said.

AQIM is holding six French hostages out of nine Europeans snatched in countries of the Sahel region.

Abou El Hamame's statement, which follows other similar warnings from AQIM, came the day after senior African and European officials met in Mali's capital Bamako to advance plans for intervention in the north.

The vast region the size of France fell under control of radical Islamist groups in the chaos that followed a March coup in the country that was once considered one of Africa's most stable democracies.

Concerned that the area could become the same type of haven for Al-Qaeda Islamists that Afghanistan was a decade ago, Mali's neighbours and the West are keen to drive the radicals out.

AQIM supremo Abdelmalek Droukdel named Abou el Hamame his representative in the Sahara and Sahel earlier this week in succession to Nabil Makhloufi who died in September, according to security officials in the region.

An Algerian like most of the leadership of AQIM, his real name is said to be Djamal Okacha and he is aged around 40.

His warning came a week after Oumar Ould Hamaha, who claimed membership of an AQIM splinter group, the Movement for Oneness and Jihad in West Africa (MUJAO), accused Hollande of putting hostage lives at risk.

Hollande responded by sticking to his guns, saying he was determined to continue with French policy on the "war on terrorism".

Abou El Hamame accused Hollande of choosing escalation instead of negotiation, and said the West had adopted a strategy of waging proxy wars after failing in direct interventions in Afghanistan and elsewhere.

He said AQIM was waging "international jihad," unlike the other Islamist groups controlling northern Mali, MUJAO and Ansar Dine.

The latter was confining its activities to the region known to local Tuaregs as Azawad, while AQIM did not recognise MUJAO's split from the main movement but the two were cooperating and talking to each other, he said.

Stop doing 'abrofos3m' and teach your children your local la...
40 minutes ago

Galamsey fight: Akufo-Addo will be meanly judged by posterit...
49 minutes ago