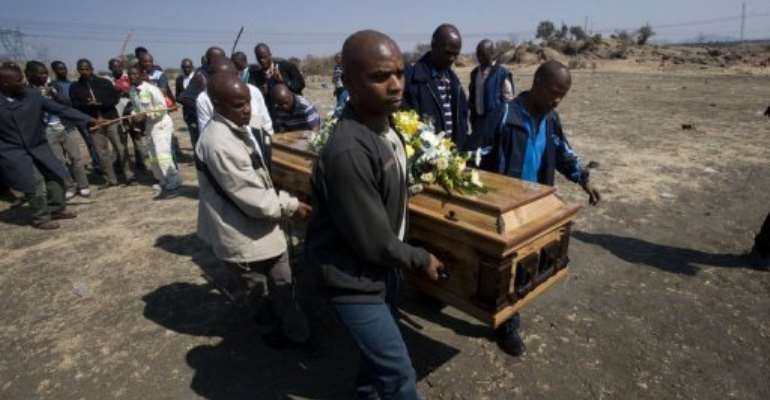 Prosecutors charged the workers based on a rule used by the former apartheid regime. By Rodger Bosch (AFP)

Prosecutors charged the workers on Thursday, based on a rule used by the former apartheid regime, in connection with the deaths two weeks ago at a platinum mine.

Funerals are due to be held on Saturday for many of the workers killed at the Marikana mine, which lies outside Rustenburg, northwest of Johannesburg.

On Friday South Africa's justice minister demanded that the prosecutors explain why the arrested miners had been charged with murdering their colleagues, a move widely denounced by legal experts.

"There is no doubt that the NPA's (National Prosecuting Authority's) decision has induced a sense of shock, panic and confusion within the members of the community and the general South African public," said Justice Minister Jeff Radebe.

"It is therefore incumbent upon me to seek clarity on the basis upon which such a decision is taken," he said.

He demanded a report on the murder charges following the August 16 shootings, the worst day of police violence in South Africa since the end of white-minority rule in 1994.

Lawyers for the arrested mineworkers went further, threatening President Zuma with court action if they are not released by 1100 GMT on Sunday.

"It is our view that the arrests of our clients were and remain unlawful," they said in an open letter.

The presidency could not confirm if Zuma had received the letter.

Police claimed self-defence in the shooting, after an escalating standoff between rival unions had already killed 10 people including two police officers during an increasingly bitter strike over pay at Lonmin's Marikana mine.

NPA spokesman Frank Lesenyego told the media it was normal procedure to charge those arrested during a confrontation with police when fatalities resulted.

No police officer has been charged.

But the apartheid-era common purpose rule, which prosecutors are apparently basing their decision on, would be hard to prove, legal experts said.

"My view is that this decision to prosecute (the miners) is premature, it's outrageous actually," said Stephen Tuson, an attorney at the Wits Law Clinic in Johannesburg.

Constitutional law expert Pierre De Vos said there was no basis for charges under a 1956 incitement act or the common purpose doctrine, which has its roots in British colonial law. Both were used during apartheid.

"Unless what we saw on our TV screens never happened or unless the NPA is hiding shocking and bizarre conspiracy theory-type evidence from us... there could be no possible valid reason," he wrote on his blog.

The chief whip of the ruling African National Congress said an explanation of the police action would "assist all of us to understand how the arrested miners should legally shoulder the sole responsibility for the tragedy that befell the Marikana community and the nation".

On Friday rituals were held for some of the dead before their bodies were taken to their home towns for burial.

A group of singing and dancing men welcomed the coffin of mineworker Mpuzeni Ngxande at the hill where he was shot dead.

A line filed past the open coffin before it was taken into his shack in the nearby shantytown.

The Council for the Advancement of the SA Constitution condemned the national prosecutors "for acting in a partisan, perverse and irrational manner in bringing charges of murder".

The mine remained shut after the failure of talks to end strike action.

Lonmin, the world's number three platinum producer, says the workers already earn around 10,000 rand when bonuses and other compensation are included.

"We have no faith in the talks, they are just a distraction to make Lonmin appear as if they are doing something," Joseph Mathunjwa, leader of the Association of Mineworkers and Construction Union, told reporters.

"There is no tangible offer that the employer has made to try and address the cause of the strike, which is the issue of the wages."