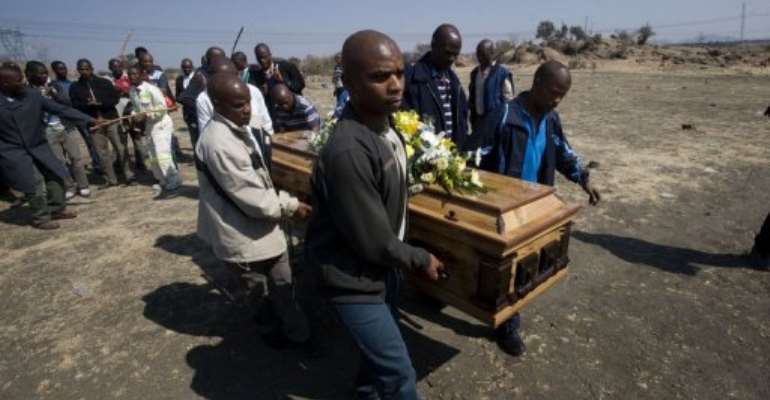 A group of men carry the body of a miner near the Lonmin mine in Marikana. By Rodger Bosch (AFP)

CAPE TOWN (AFP) - South Africa's justice minister said on Friday he wanted prosecutors to explain why 270 miners have been charged with murdering 34 colleagues shot dead by police in a move described as "bizarre".

The National Prosecutions Authority (NPA) has not given details of the charges against the Lonmin platinum mine workers, which experts believe were laid based on a 1956 law relied on by the apartheid regime to protect white rule.

"There is no doubt that the NPA's decision has induced a sense of shock, panic and confusion within the members of the community and the general South African public," said Justice Minister Jeff Radebe.

"It is therefore incumbent upon me to seek clarity on the basis upon which such a decision is taken," Radebe said.

Radebe has demanded a report from the national director of public prosecutions to explain the rationale behind Thursday's decision, two weeks after police gunned down the striking miners at Lonmin in an action that shocked the world.

Constitutional law expert Pierre De Vos said the NPA had no basis to charge the workers under an apartheid incitement act or a so-called common purpose doctrine which has its roots in British colonial law. Both were used during the white minority regime.

"Unless what we saw on our TV screens never happened or unless the NPA is hiding shocking and bizarre conspiracy theory-type evidence from us that places the events we saw on television in an entirely different light, there could be no possible valid reason," he wrote on his blog Thursday.

Police have claimed self-defence as the violence spiralled during a strike over pay and an escalating standoff between rival unions that had already killed 10 people including two police officers.

It was the worst day of police violence in South Africa since the end of white-minority apartheid rule in 1994 but no police officer has been charged.

"The decision seems to flout the NPA Act as well as the constitution, which requires every member of the NPA to act without fear, favour or prejudice," De Vos said on his blog Constitutionally Speaking.

"Instead they have acted with fear, favour and prejudice to advance some or another political agenda, further eroding the little trust South Africans might still have left in them. It is, indeed, shameful."

De Vos said he could not believe the prosecution considered that any court would find the miners guilty.

The decision to charge them was "bizarre and shocking and represents a flagrant abuse of the criminal justice system" likely to protect politicians and police.

"Even if it was true that the miners provoked the police, this could never, ever, make them liable for the killing of their comrades," said De Vos.

"At most, provocation could be a factor taken into account in judging whether the police officers involved in the massacre should be found guilty of murder or not."

NPA spokesman Frank Lesenyego told the media that that it was normal procedure to charge those arrested during a confrontation with police.

"In a situation where there are suspects and they confront or attack members of the police and a shooting takes place, resulting in the fatalities of either the police or suspects, those who get arrested are charged," he said.