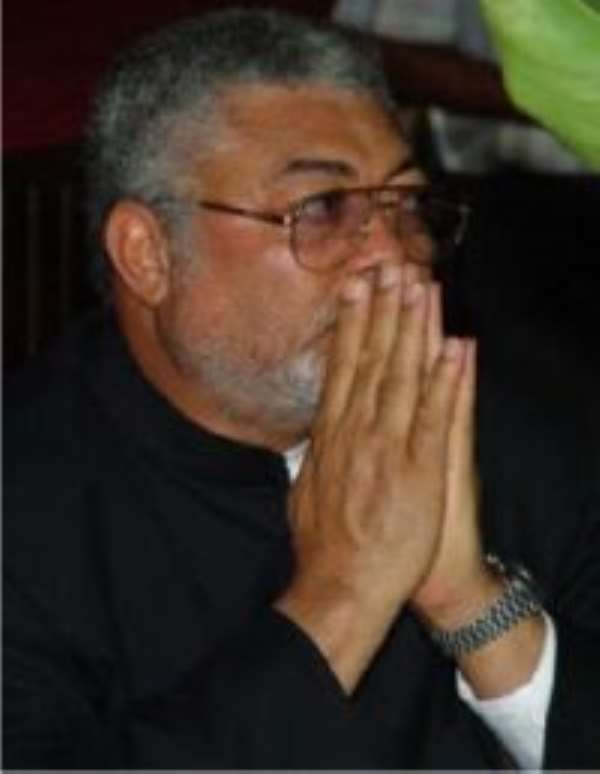 -Tells electorate it is risky to cross rotten wooden bridge

Former President Rawlings yesterday used a philosophical statement to draw the attention of Ghanaians to the potential danger that lies ahead of them if they should make the mistake of putting their destinies in the wrong hands when they to the polls on December 7.

Apparently referring to the ruling National Democratic Congress, he warned the electorate against being forced to believe that their aspirations could be met using the incumbent government as the vehicle to their promised land.

In what many have described as a statement pregnant with meaning, former President Rawlings somewhat sought to draw attention to the need for a fresh start for the nation's socio-economic development journey, apparently not with the NDC in its current shape.

Addressing the special delegates' congress of the NDC at the Baba Yara Sports Stadium in Kumasi, Mr Rawlings drew attention to the fact that it is too risky to force people to cross a rotten bridge, adding that it is better to stop all movements and build a new bridge.

Mr Rawlings also challenged President Mahama to get rid of the “babies” in his government who have got “sharp teeth” and are always “spewing horrible invectives” on people they disagree with.

He lamented about the activities of those babies who have destructively been using their 'sharp teeth' to bite members of the party who worked tirelessly to ensure victory in the 2008 elections.

“Mr. President, fellow Ghanaians, it is said that we should not throw out the baby with the bath water, but what do we do when some of the babies in the tub are babies with teeth, biting and spewing invectives? Should they not be lowered out with the dirty water so we can concentrate on the good ones? After all one bad nut is all it takes to spoil the taste in your mouth,” Mr Rawlings stated.

The NDC founder condemned “the uncivilized tendency of poking thoughtlessly people who have sacrificed for both party and country, and later attempting to embrace them for political expediency,” calling for an end to the practice in the ruling party.

“Let us begin to show civility towards each other, in the hope that it is not too late. How much credibility can be restored between now and the elections?” he wondered.

The NDC founder also spoke against the 'greedy bastards' and 'fair weather friends' who do not want to be part of the hectic electioneering campaign, and sit in the comfort of their homes for others to work for victory only for them to surface to reap where they have not sown.

“...those who have been sitting in the comfort of their homes, both home and abroad, waiting for others to win the elections for them, better wake up and hit the campaign trail,” he charged.

Mr Rawlings further drew the attention of the party's leadership to the fact that the NDC is made up of diverse political persuasions, groups and interests, stressing the crucial need for the contributions of all the interest groups to be “recognized, carefully weighed and harmonized at all times” to guarantee the continuous survival of the party.

The former president further noted that it was in the interest of the NDC “to re-engage and remain focused on its core values, ideals and traditions of truth, honesty, integrity and justice, adding: “These are the cherished ingredients that have sustained the party over the past two decades.”