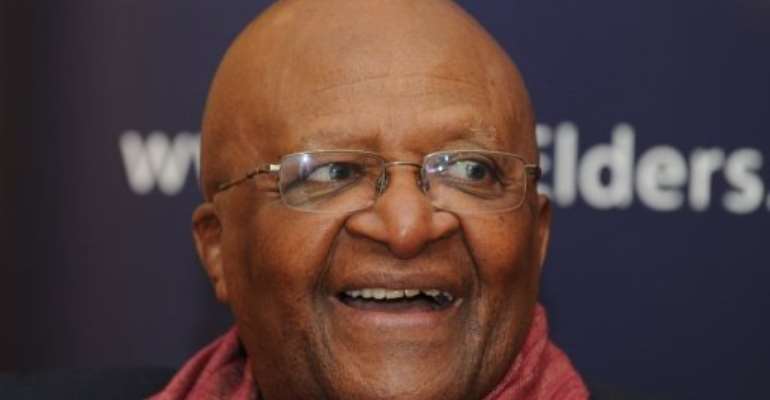 Desmond Tutu said he had been "wrestling with his conscience" over Tony Blair. By Sajjad Hussain (AFP/File)

CAPE TOWN (AFP) - Peace icon Desmond Tutu on Tuesday said he would boycott an event in protest at sharing a stage with former British leader Tony Blair over his "morally indefensible" support of the US-led Iraqi invasion.

The Nobel Peace Prize laureate decided to withdraw as a speaker at a one-day leadership summit after "wrestling with his conscience and taking counsel", his office told organisers.

"Ultimately, the archbishop is of the view that Mr Blair's decision to support the United States' military invasion of Iraq, on the basis of unproven allegations of the existence in Iraq of weapons of mass destruction, was morally indefensible," his office wrote to organisers.

The theme of the one-day summit on Thursday was leadership which could not be separated from morality, the letter added.

"In this context, it would be inappropriate and untenable for the archbishop to share a platform with Mr Blair."

Well known for his outspokenness, Tutu's withdrawal comes amid plans by a local Muslim political party Al Jama-ah to protest at Blair's participation, linked to the decision to send troops into Iraq in 2003.

"The demonstration is being held to support a warrant of arrest to charge him for crimes against humanity relating to the invasion of Iraq which led to the killings of millions of Iraqis," Sapa news agency quoted the party's president Ganief Hendricks as saying.