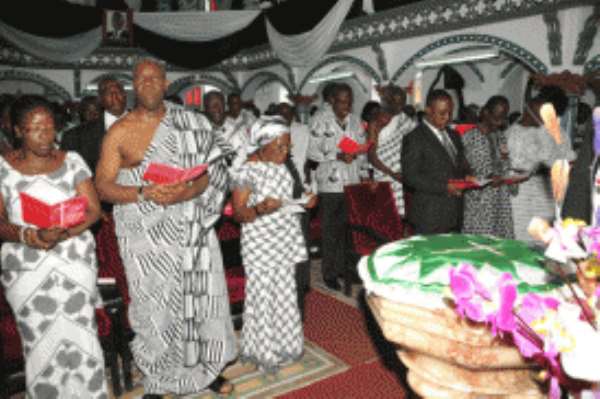 What was originally billed to be purely a family affair at the Wesley Methodist Cathedral in Cape Coast turned out to be national thanksgiving service for the late President John Evans Atta Mills.

The funeral brochure used at the Independence Square for the funeral service on Friday August 10 indicated that the family would organise a private thanksgiving service in Cape Coast on Sunday.

However, the event turned out to be national in character as people from all walks of life thronged the Wesley Cathedral to thank God for the successful burial and pray to God to give the family strength to withstand the death of their beloved one.

The usual calm on Chapel Square where the Wesley Cathedral is located busted at the seams as the chapel was filled to capacity and canopies were erected at the forecourt to accomodate part of the congregation.

Clad in black and white many sat on plastic chairs with the inscription “Wesley Cathedral donated by His Excellency Prof. John E. A. Mills.”

To enable those who could not find space inside the chapel to follow proceedings officiated by the Rev Nicholas K Asane, Bishop of the Cape Coast Diocese, close circuit television (CCTV) sets were provided under the canopies.

The service was interspersed with song ministration from the Cathedral Choir and in most cases, the congregation danced in praise of God.

Although the mood of the family and other people in Cape Coast was that of gloom, some of them told the graphic.com.gh that though the death of President Mills was a big loss, they were consoled by the fact he served Ghana to the best of his ability.

While the service was going on, some family members and residents who could not make their way to the cathedral stayed in the house to reflect on the loss and continued with the family celebration.

Mr Amissah-Arthur described the late President Mills as a man of honour who contributed to the development of his family, country and the world.

He said the late President Mills was a man who led a life worthy of emulation by all Ghanaians.

The Vice-President said it was evident that the late President led a true Christian life according to the teachings of Christ.

“He didn’t believe in an eye for an eye, he loved his neighbours and prayed for his enemies,” he said, adding that his life was worth celebrating.

Mr Amissah-Arthur said many Ghanaians he knew personally had resolved after the death of President Mills to live exemplary lives like the late President.

He recounted that after the burial of the late President, a dove descended on the vehicle of the widow, Dr Ernestina Naadu Mills, as her vehicle moved away from the burial grounds.

That, he said, was a sign that the late President Mills had left peace with his family and nation.

He said the late President Mills had contributed significantly to the development of the country and urged all Ghanaians to honour him even in his death.

Preaching the sermon, Rt Rev Nicholas Asane, the Methodist Bishop of Cape Coast, said the late President died as a true Christian and member of the church.

He said all the 15 dioceses of the Methodist Church held simultaneous services in his memory.

Rt Rev Asane indicated that it was time Ghanaians lived by Christian virtues and eschewed negative behaviours that undermined or belittled people in authority.

He stressed the need for Ghanaians to respect those placed in authority and desist from dirty politicking that dishonoured people in authority.

“We must stop abusing leaders and those who have been placed in authority,” he said.

Bishop Asane said considering that the late President Mills was highly criticised and insulted by many, “I did not expect that his burial will be this gargantuan,” a statement which brought a moment of laughter to the otherwise solemn congregation.

He advised Ghanaians to walk right with Christ and abhor negative practices such as falsehood, stealing, bitterness, rage and anger, as well as seek to live in peace with one another as the late President preached.

He said if Ghanaians walked with Christ and lived according to His word, dirty politicking would be a thing of the past.

In an interaction with journalists after the church service, the Vice-President, Mr Amissah-Arthur, said the government will ensure that the peace and stability that permeated the country during the funeral of the late President Mills will be maintained as a lasting legacy to his memory.

That, he said, would be demonstrated by the government ensuring that the December election was conducted peacefully. without

Mr Amissah-Arthur said the commitment by the late President to deepen the country’s burgeoning democracy, would be followed to its logical conclusion.

Mr Amissah-Arthur expressed gratitude to the public and pledged to justify the confidence reposed in him by President John Dramani Mahama and the rest of Ghanaians.