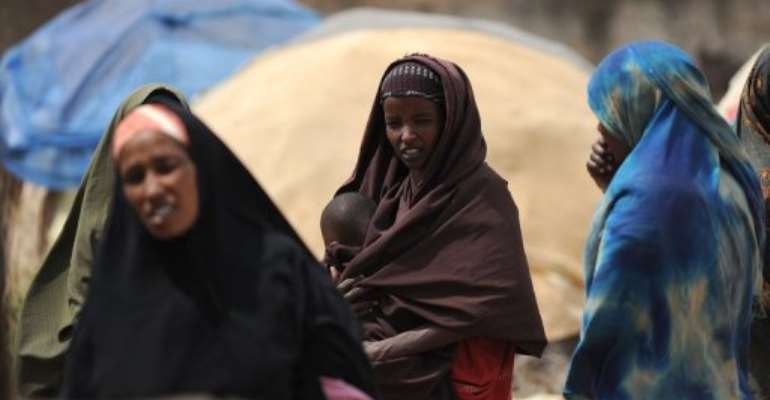 Little influence from the Somali government is felt in Baidoa. By Simon Maina (AFP)

BAIDOA, Somalia (AFP) - Standing in front of the rag-covered tent that has been her family's home for 18 months, grandmother Halbo Maow says that while the men with the guns might have changed, life still remains tough.

"Shebab or government, it is all the same," said Moaw, who lives in the southern Somali town of Baidoa, a former bastion of the Al-Qaeda linked Shebab insurgents, that was captured by Ethiopian forces in February.

"We got nothing then, and we get nothing now," the 70-year old added, as young girls in coloured shawls milled around.

Forced to leave her village by famine last year, Maow now ekes out an existence collecting firewood to sell in Baidoa, a dusty, impoverished but strategic town some 200 kilometres (125 miles) from the Ethiopian border.

Little if any influence of the weak and corruption riddled government in the capital Mogadishu -- due to end its mandate on August 20, with new permanent institutions to be ushered in by a UN-backed process -- is felt here.

Five months on, the Ethiopians are still the dominant force in the area, and the sight of their tanks and troops greets new arrivals at the airstrip on the edge of Baidoa.

But while some Ethiopian soldiers are seen driving around in pickups, most of them appear to have withdrawn to fight remaining Shebab forces in the surrounding areas.

That has left the weak administration they installed struggling to step in.

"The Ethiopians have bought security, but now we are waiting for the government and international community to bring us food and health services and schools," said Maow, who has five children and ten grandchildren.

In Baidoa's bustling central market, there seems to at least be some sense of that security.

Donkeys pulling carts laden with vegetables amble along the crowded roads, as women sell dates in front of pharmacies and hardware stores that are almost all open for business.

Standing next to a pile of brightly coloured mattresses on the steps of his shop, Mahad Elmi Yerow says that income has increased since the Shebab were pushed out.

"It is better now than when Shebab were here, because business is more open than before," Yerow said, adding however that gunmen still prowl the 250 kilometre (155 miles) route to Mogadishu.

"There are some militias between the government lines and Shebab and if you do not stop they shoot at you -- I even have some mattresses with bullet holes in them," he added.

As he talked, gun-wielding men from the local authorities, dressed in civilian clothes and ill-matching uniforms, roughly push away a crowd that has gathered in the street.

Yerow says that he, like other businesses, has already started paying taxes to the local government. For now at least, it is only these men with guns that his money pays for.

"The government in Mogadishu is busy with its own issues and we are not receiving anything from them -- we just have to rely on the money we can raise here," said regional governor Abdifatah Mohamed Ibrahim.

"For now, we are only dealing with the security situation, we do not have the means to do anything else for the people."

Forced to flee when Shebab took the town in January 2009, Ibrahim is now nominally back in charge -- with Ethiopian support.

But he dismisses fears about the uniformed men with guns who roam the town, saying they are security officials on their day off.

As for the Ethiopians, he says they are helping to train 1,700 local militiamen, later seen lazing around in a compound on the edge of town.

Ethiopian troops -- who invaded Somalia in 2006 before retreating amidst a bitter insurgency, only to invade again in 2011 -- remain hugely controversial.

The plan is for them to hand over to the African Union force but recent statements by the Ethiopians have left the door open for them to stay longer.

A thousand Burundian troops with the African Union mission in Somalia are expected to deploy in Baidoa within days, with a further 1,500 troops from the force -- Ugandans this time -- arriving by the end of August, said the AU commander here, Gerard Bigirimana.

"First I will station them south to try and open the axis towards Mogadishu," said Bigirimana, who currently commands an advance party of 200 troops.

"Later, when we are full strength, then we will see about taking over from the Ethiopian army."

As for the local population, it seems that even if it's imposed from outside, some peace is better than none.

"It is the Somalis who are going to join Shebab robbing and killing us -- so the Ethiopians are just protecting us from our own," said labourer Abdulahi Muhamed Nuur Nuur, aged 22.

"I have no problem with the Ethiopians being here to defend us."