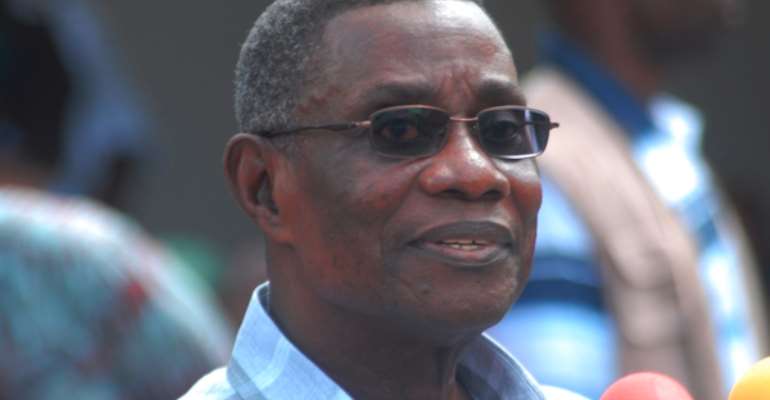 During his church service on Sunday 29th July, Nigerian Prophet T.B. Joshua described the late President of Ghana, Professor John Evans Atta Mills, as a martyr whose death would be a catalyst for unexplainable political unity within Ghana.

Joshua dedicated his sermon, 'The Highway To Heaven' to Mill's life and legacy. “You need not fear where you are going when you know Jesus is going with you,” he told the sombre congregation. “Any day, even today may be our final day on earth. We need to be sure that we are ready to depart. If you are prepared to die, you are prepared to live.”

Joshua continued by describing death not as a 'period' but a 'comma' because of the death and resurrection of Jesus Christ. “Whether you are young or old, what matters is the grace to continue living hereafter. A man may die young yet be satisfied with living but a wicked man is not satisfied even with long life,” he added.

Joshua said the service was to be in celebration of Mill's life and not an occasion of grief or mourning. “I am not mourning our dear late father but I am here celebrating his wonderful life. What a life well spent!” Mills' only son, Sam Kofi Mills, whose whereabouts had been the source of debate within Ghana, was present at the service. “I came here today to thank God for the life of my father,” he told the congregation. Another notable visitor in The SCOAN during the service was Mrs Kezia Obama, the step-mother of current US President Barack Obama.

T.B. Joshua said Mills was a martyr, adding that the outcome of his death would be glory and honour for the nation of Ghana. “Our father is a martyr; you know what I mean by martyr by the legacy he left behind. Unexplainable unity among the political class will happen in Ghana. That is what our father fought for and won. Also, there will be a revolution in governance.”

He further stated that his death was in accordance with God's will and timing. “The departure of our dear late father was purely divine. Humans could not tamper with it. It was unchangeable. God said, 'No - the martyr has finished his job and run the race.' It was not sickness or disease that killed him; it was God's time.”

He said Mills himself knew it was his time of departure. “He knew he was going home. The people around our dear father – he was telling them, 'I will surprise you people tomorrow' – and he surprised them.”

Prophet Joshua went on to tell the world about his relationship with Professor Mills, describing it as one based on 'revelation from God.' Joshua explained that he first met Mills while he was Vice President. He said during their first encounter he had prophetically declared that Mills would lead his nation as president, a revelation he said Mills was initially sceptical of due to his intention to return back to his academic career as a lecturer.

Joshua explained, “After some years, I received a phone call from him telling me that he was called to contest as a presidential candidate of his party. I said, 'Remember what I told you!' He came to visit me and I told him, 'Your journey – three contests. First, you will lose; second, you will lose. Then you can think of winning to become president.' ” Wondering at the marketability of a candidate who would lose twice in a row, Joshua had counselled Mills to believe that with God, all things would be possible.

Joshua also explained how Mills had called him from South Africa during his third term candidature to explain he was booked to go for an operation for his eyes. After prayer, Joshua prophetically reminded Mills of a dream he had in the past whereby he was being led about as if blind. Joshua told him that such would be his fate if he attempted an operation.

However, Mills still opted for an operation on one of his eyes. “He said, 'Pastor, I would like to attempt an operation one eye first. If it does not work, I will stop it.' Well, our father went for an operation on one eye and coming out from the operation, the eye stopped working and this also affected his ears. He called me – 'Man of God, I am coming straight to Nigeria...' We prayed together and at the end of the day, the Lord restored his ears, as well as the other eye that was not operated on.”

According to Joshua, Mill's road to presidency was fraught with numerous hurdles and challenges. He explained that in the height of his campaign, Mills was on the verge of giving up. He described a meeting with him where, “The first words from our father was, 'I cannot contest; I want to drop the ambition.' I said, 'No – blasphemy! God said you will get there – you can't change God's Word because of the predicament.”

Addressing the rumours that had circulated around the internet that Joshua had not foreseen Mill's demise, he then reminded people of the prayer he had offered for Mills for God to give him the 'spirit of a finisher' during his thanksgiving service in The SCOAN a few days after his inauguration. “At that moment of celebration, there was nothing to call for that kind of prayer point,”he added, describing the prayer as a prophetic indication of what he had seen coming.

The congregation then observed a minute's silence in memory of Mill's and Joshua led them in prayer for the nation of Ghana, as well as the new President.

The service continued with over 120 Nigerians who were imprisoned in Libya coming forward to share their experiences. They said that after spending up to seven months in Libyan prison, they had reached out to Prophet T.B. Joshua and requested for his prayers. Shortly afterwards, they were released and deported back to Nigeria with only the clothes on their backs. Joshua gave each person the sum of N100,000 and two bags of rice, stating that if not, many would be tempted to join bad gangs, robbery or prostitution to make a living.