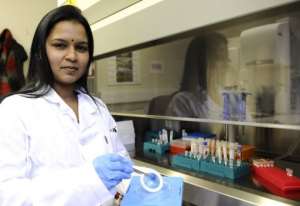 BLANTYRE (AFP) - Poverty drove single teenage mother Kate Mzungu to seek out a rich older man, who buys her food and pays for her housing in exchange for the pleasures of her young company.

But that includes having unprotected sex in a country where 14 percent of the population has HIV.

"I am scared of contracting HIV through my sugar daddy, because he can go for any girl he wants," 17-year-old Mzungu told AFP.

She calls herself a "secret second wife" to her lover, a married man aged 55. She once turned to prostitution to support her child, but says her secret life now is better.

"I have no regrets because he has bought me a small house and a car," she said.

AIDS experts say cross-generational sex, especially among older men and younger women, is one of the reasons that African women bear a greater burden of HIV infections, about 60 percent of cases in southern Africa.

"It's one of the means for HIV transmission, especially men that have their spouses but they go out with these younger ladies," said Linda Chongo, advocacy officer of Mozambique's National Network of AIDS Service Organisations.

"It is quite difficult to negotiate safe sex when you are already in a lower position. As money rules, the person with the money will be the one who will impose the rules to be taken," she said.

"Some of the reason is poverty but if you look into Africa you will see that poverty has always been there, but our grandmothers and mothers didn't behave the way we are behaving now," Chongo said.

Stuart Chuka, a coordinator of Malawi's AIDS treatment programme, said that even women who know the dangers of HIV find themselves in relationships with older men.

"One of the reasons is that the young women do not have the capacity more especially because of finances," to provide for themselves, he said.

In Zimbabwe, these long-term extra-marital affairs between older men and young women are known as "small houses" -- as opposed to the "big house" where a man's wife lives.

"As part of our on-going campaign to prevent new infections, we are designing posters to discourage age-mixing in relationships," said Beauty Nyamwanza, a programme officer at Zimbabwe's National AIDS Council.

The health ministry has already raised billboards showing women university graduates who testify about how they have made it without the support of a "sugar daddy".

Such campaigns appear to be paying off.

"There has been a lot of progress, the number of new infections is declining in the region," said Rick Olson, an HIV specialist at UNICEF, the UN children's agency.

"The number of condoms purchased by governments have also grown," he added.

But younger women still need support to give them the confidence to demand condoms, he added.

"When partners are older, it's hard to negotiate persistent condom use," he said.

"It's for people to understand that the risk in a cross generational relationship is that young girls lack the power to negotiate safe sex."

In South Africa, an increase in teenage pregnancies in eastern KwaZulu-Natal was blamed on older men seeking out younger women. The provincial government has set up 89 huge billboards to highlight the dangers of sex with older men, while creating support groups for young women to resist such relationships.

South Africa is also launching clinical trials for a vaginal ring which releases ARVs into the body, warding off infection.

Sibongile Molefe, a 41-year-old women with HIV, said the efforts are welcome.

"To use a condom, it's still a problem. They don't want to practice safe sex," she said of South African men.

"But while at the end, it's us, we are suffering more," she said. "Because we have to stand firm, this is your life."