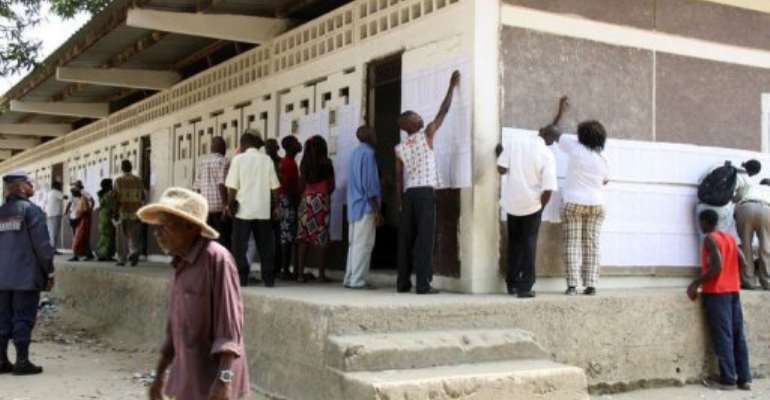 People look for their names on voters' lists at a polling station during the parliamentary elections in Brazzaville. By Guy-Gervais Kitina (AFP/File)

BRAZZAVILLE (AFP) - A four-year-old child was hurt by a stray bullet and two other people were wounded in Congo as opposition protesters stormed an elections commission office, officials said Monday.

The protesters "laid siege" to the office in the central town of Gamboma on Sunday night, insisting their candidate -- opposition coalition ARD leader Mathias Dzon -- had won Sunday's first-round vote, the commission said.

"They stood watch the whole night and wouldn't let us work. This morning they threw stones at the soldiers providing security, who fired shots in the air," local election commission (CONEL) chief Lucien Okana told AFP.

A local resident said gunshots could be heard for more than two hours.

"A four-year-old child was hit by a stray bullet. Just before that, in the confusion, the mayor's car hit two people, who have been hospitalised," the resident said.

A police source confirmed the report and said the mayor's residence had been pillaged.

Dzon said Sunday there had been "a large organised fraud in Gamboma with the complicity of the military", and said his campaign had caught 1,000 would-be voters with fake papers and stopped them from casting ballots.

"Despite all this, the results from the ballot boxes show I am the winner," he said.

CONEL chief Henri Bouka said the commission would have official results on Thursday or Friday, and called for patience until then.

No other election-related violence was reported.

Congolese human rights group OCDH estimated that turnout was only 15 percent for the vote, which Sassou Nguesso's PCT and its allies are widely expected to dominate.

The ruling coalition is hoping to keep its absolute majority. It held all but 12 of the 135 seats in the outgoing parliament.

A second-round vote is due on August 5.

‘We're concerned about the seeming judicial dictatorship und...
14 minutes ago