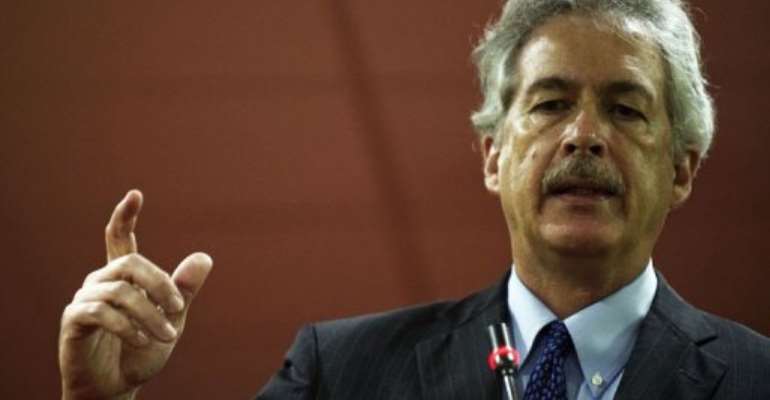 Burns hailed the elections in Libya as "critical milestone". By Gianluigi Guercia (AFP)

TRIPOLI (AFP) - US Deputy Secretary of State William Burns visited Tripoli on Saturday for talks on enhancing security after historic elections, the first since the ouster of Moamer Kadhafi's regime last year.

"It is deeply in the interest of both Libya and the United States to cooperate on addressing threats to Libya's security," Burns said after meeting with Libyan interim Prime Minister Abdel Rahim al-Kib and other officials.

"A stable, prosperous future for Libya will rest on achieving progress on security, including Libya's ability to secure its borders, control weapons and prevent any groups from undermining the progress made thus far," he added.

Burns praised the Libyan authorities for "ably" guiding the country through a complicated transition period and hailed the elections as a "critical milestone" on the path to establishing lasting democratic institutions.

Talks also touched on health and education as areas for cooperation.

No contracts were signed during the visit but Burns said the United States looked forward to forming relationships across the board, including between the countries' two armies, once a new government is formed in Libya.

The flash visit comes one week after Libyans voted for a national congress, which will be the country's first elected authority after more than four decades of dictatorship under slain leader Kadhafi.

Burns also met members of the Justice and Construction Party, an Islamist party launched by the Muslim Brotherhood, and was due to meet with representatives of the National Forces Alliance, a liberal coalition.

Libya's electoral commission is still tallying votes and it remains unclear which of the two groups will have the most seats in the next congress.

Our police officers don't work with their senses as soldiers...
17 minutes ago