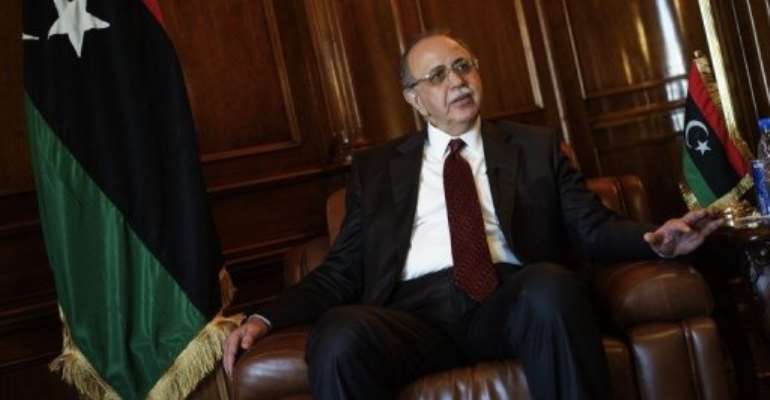 TRIPOLI (AFP) - Prime Minister Abdelrahim al-Kib predicted a bright future for foreign investment in Libya especially in the oil sector whose infrastructure needs to be overhauled, in an interview with AFP.

"The plan is to revamp the whole thing and work on the infrastructure of the oil and gas industry... (an) area for projects for companies that might be interested so that we can increase production levels," he said.

The outgoing premier, whose government did not have the prerogative to sign contracts, noted the country's 2012 crude output had surpassed expectations and reached its pre-revolution levels.

Current production is about 1.6 million barrels per day.

But other opportunities for investment abound: tourism along a 1,700-kilometre (more than 1,000-mile) Mediterranean coastline, basic infrastructure including roads and housing, airlines, the health and education sectors, and e-governance.

"I guarantee you, any sector you think of, there are plenty of projects to work on," said Kib, a US-educated electrical engineer, urging international companies to make fact-finding visits.

Kib said his country was heading towards a knowledge and market-based economy in which corruption would be replaced by a robust legal system and a competent workforce.

Libya has already allocated 650 million dinars ($500,000) to support small and medium size enterprises and over 1 billion dinars for training and education.

Kib pins hopes on the private sector to generate employment and motor development.

Libyans on July 7 voted for a General National Congress, a 200-member legislative assembly, in landmark elections following 42 years of dictatorship under Moamer Kadhafi.

The signing of contracts, which came to a complete halt during the 2011 revolt that ousted Kadhafi, is expected to resume with elected authorities in place.

In the months leading to elections, hundreds of companies and businessmen from around the world visited Libya to assess the investment climate and look for partners.

He pointed to almost-on-time elections as his cabinet's crowning achievement.

Preliminary tallies released by Libya's electoral commission this week all point to a strong performance of a liberal coalition led by wartime premier Mahmud Jibril.

The coalition trounced Islamist contenders across the country and may hold a majority in the next congress if it wins over other parties and independents.

"I think the moderates will prevail because that's the nature of Libyan society," Kib told AFP. "Moderation will prevail throughout the history of Libya coming into the next hundreds of years."

Kib became prime minister in November replacing fellow technocrat Jibril, one of the architects of the 2011 revolution and leader of a coalition sweeping the polls.

After managing a turbulent transition period, rocked by deadly clashes that highlighted the difficulty of disarming and integrating ex-rebels into state institutions, Kib says he has "no regrets," only lessons learned.

One of them is balancing the high expectations of a population that swung overnight from completely subdued under a brutal dictatorship to empowered by a successful revolution.

"(Everybody) wants to show that they own this place," said Kib, noting that this was a challenge that at times could play out positively, as it did during the largely trouble-free election day.

Security, he added, will be no doubt one of the key obstacles facing the next cabinet, which should be in office by late August. But Kib was quick to point out that crime rates in Libya were lower than in many other parts of the world.

Kib, who has unveiled state-of-the-art prisons and courtrooms during his term, said justice and human rights were crucial to Libya's future, while acknowledging violations.

"It is true we have had some individual violations but that is the nature of things after a revolution like the one we had," he said.