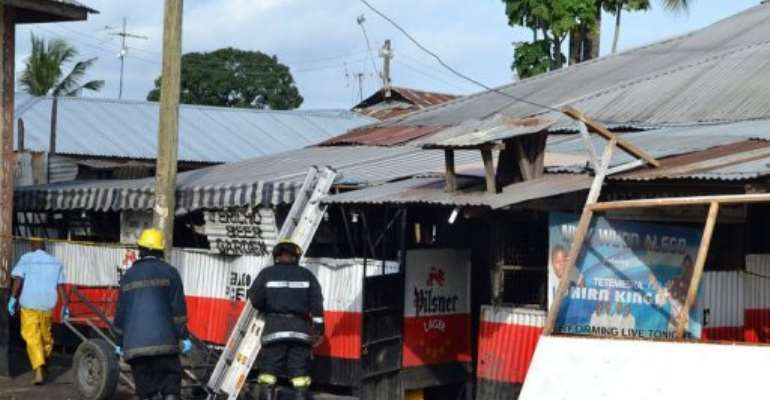 Mombasa's firemen inspect the scene of a grenade attack. By (AFP)

NAIROBI (AFP) - A Kenyan court charged two Iranian nationals with illegal possession of explosives Monday, a day after a grenade attack on a bar in the southern city of Mombasa that killed three people.

The Iranians, whom police said they arrested last week over suspected links to a terror network planning bombings in Mombasa and Nairobi, are accused of possessing 15 kilos (33 pounds) of the powerful explosive RDX, according to the charge sheet presented in court.

The pair, Ahmed Mohamud and Said Mausud, were "armed with intent to commit a felony known as grievous harm", the charge sheet said.

The two men, who were not represented by a lawyer, denied the charges.

The court extended their detention until Wednesday, when it will make a bail ruling. Prosecutors asked the court to deny the men's bail application, calling them a flight risk.

The explosives were found in Mombasa thanks to information obtained from the two men, police said.

A police source said one of the Iranians was detained Wednesday in Nairobi, the other Thursday in Mombasa.

Iran's embassy in Nairobi did not immediately respond to a request for comment.

It was not clear who was behind Sunday's deadly attack, but such incidents have intensified since Kenya sent tanks and troops into Somalia late last year.

Sunday's attack came just two days after the United States had warned its citizens of an imminent threat of attack in Mombasa.

Chiefs and Queen mothers of Nadowli-Kaleo congratulate Alban...
21 minutes ago

I intend to live my my oath – Bagbin
21 minutes ago