South African star goes back to school at 60 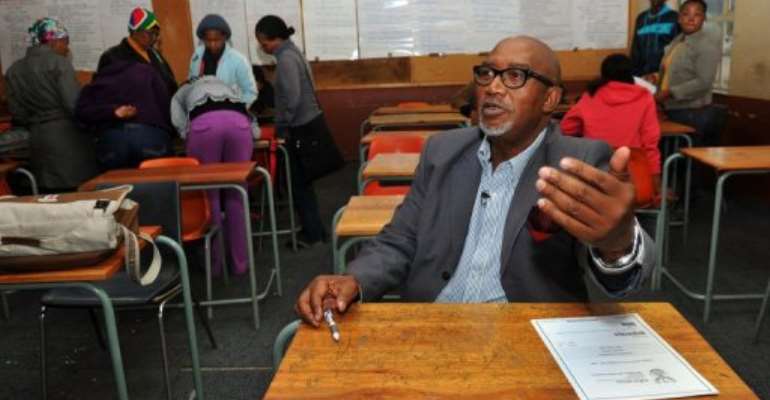 On week nights, massively popular Sipho 'Hotstix' Mabuse is in a classroom near his Soweto home. By Alexander Joe (AFP/File)

But on week nights, the massively popular music maker is in a classroom near his Soweto home, working to earn the high school degree he abandoned in 1969 as his music career took off.

In a country where the public education system is struggling and half of all students don't always have a desk, Mabuse eschewed Johannesburg's posh private schools or a personal tutor.

Instead, he signed up for the government's adult education classes, a move school officials heralded as a welcome endorsement of the beleaguered public system.

"When I started becoming a musician, I was at a very impressionable age. Young, 15, 16," he said.

"Suddenly you make all this money, and you get invited to all the (graduation) dances and all the beautiful girls, you're attracted by all those things, and you forget that you're still a scholar. So I dropped out of high school."

His early talent for drums earned him the nickname Hotstix and his career took him across the world, performing with the likes of Percy Sledge and Paul Simon, who recorded parts of his landmark "Graceland" album in South Africa.

Mabuse won his own popular success with songs pulling elements from township music with jazz, funk and disco.

Even in South Africa's state of emergency, during one of apartheid's most brutal periods, his 1985 single "Burn Out" leapt from the townships to mainstream success, selling over 500,000 copies.

He remains a fixture in South African music with regular performances and a seat on the National Arts Council.

But last year, he decided something was missing.

"When I started growing up, really growing up as a responsible professional, I realised there was something that I had not completed, and that was my matric," he said, referring to his high school education.

In his first year, he took six classes and passed four -- a heavy course load even for full-time students. This year, he's taking geography and history, the last two required to matriculate, plus business economics just for fun.

He sits in the front row of a classroom where many of the students are much more recent drop-outs. Dressed in a sharp grey suit, he jokes with girls about their boyfriends and shows off the cover art for his upcoming album "Class Act".

When class starts, he's the one with questions and wondering about exams.

"The Great Trek. Do you think that will be the kind of history we will do? When I was in school, that was the history that we did. Do we still do that?" he asked.

The migration of white Afrikaners into the country's interior doesn't figure as prominently as it did when Mabuse first was in school.

Blacks then were subjected to so-called Bantu education, meant to "train and fit" them for a subservient role under the white-minority regime.

Seven years after Mabuse dropped out, the apartheid government forced high school students to learn in Afrikaans, a move that sparked the 1976 Soweto uprising and led many black students to boycott schools.

Under the democratic government, education is the single biggest budget expense, but the results are disappointing.

In northern Limpopo province, some schools began receiving text books six months into the academic year, and only after a court order forced the government to act.

Nationally, enrolment has been slipping. About 70 percent of seniors passed their exams last year, a feat that requires only a 30 percent mark in some subjects.

A survey last year found that one out of two students doesn't always have a desk; 15 percent of schools have no electricity; 10 percent have no running water.

At Thaba-Jabula Secondary School, Mabuse's attendance has become seen as a national endorsement that public schools can still offer a good education.

Teachers say enrolment is up, and students appear more attentive, inspired by their celebrity classmate.

"We all want the same thing. All of us want knowledge," Mabuse said of his fellow students.

"For them to see a 60-year-old man coming to class and sitting down in class is in itself encouraging. It says to people, well, if he can do it at that age, well, why shouldn't we, you know much younger people, go back and study."