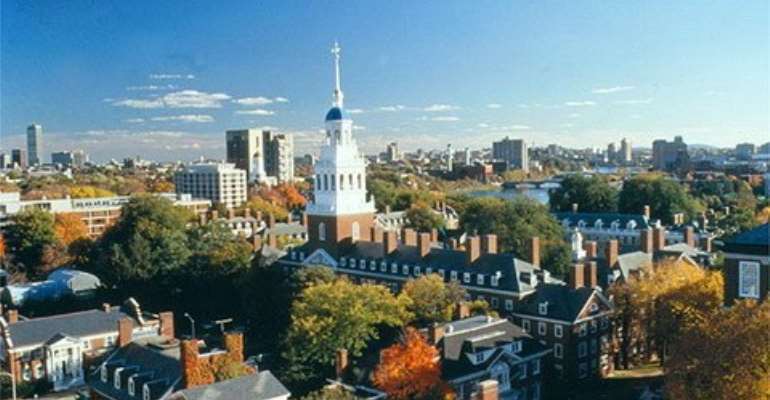 This autumn more than a million students are going to take part in an experiment that could re-invent the landscape of higher education.

Some of the biggest powerhouses in US higher education are offering online courses - testing how their expertise and scholarship can be brought to a global audience.

Harvard and the Massachusetts Institute of Technology have formed a $60m (£38m) alliance to launch edX, a platform to deliver courses online - with the modest ambition of "revolutionising education around the world".

Sounding like a piece of secret military hardware, edX will provide online interactive courses which can be studied by anyone, anywhere, with no admission requirements and, at least at present, without charge.

With roots in Silicon Valley, Stanford academics have set up another online platform, Coursera, which will provide courses from Stanford and Princeton and other leading US institutions.

The first president of edX is Anant Agarwal, director of MIT's Computer Science and Artificial Intelligence Laboratory and one of the pioneers of the MITx online prototype.

He puts forward a statistic that encapsulates the game-changing potential.

The first online course from MITx earlier this year had more students than the entire number of living students who have graduated from the university.

In fact, it isn't far from the total of all the students who have ever been there since the 19th Century.

'Tipping point'
The internet provides an unparalleled capacity to expand the reach - but it also raises far-reaching and thorny questions for the traditional model of a university.

Harvard Harvard, birthplace of Facebook, has joined a project to put courses as well as social lives online

"We've crossed the tipping point," says Professor Agarwal. The courses being launched in the autumn, he anticipates, will have at least 500,000 students - and probably many more.

As an example of how courses might be delivered, the MITx prototype taught an electronics course using an interactive virtual laboratory, e-textbooks, online discussions and video lectures.

Assessment of the course, which took 10 hours per week, was entirely automated.

"This could be the end of the two-hour lecture," says Professor Agarwal. "You can't hit the pause button on a lecturer, you can't fast forward."

Recorded lectures - available at the push of an iPad - could be more like text books, with universities using the best available.

Assessing large numbers of online learners raises a big practical challenge - and edX is a laboratory to see how this can be developed.

"We will collect enormous amounts of data from the edX platform about how students are interacting with the courses and online tools and assessments."

Degrees of degree
Professor Agarwal wants to include social sciences and humanities subjects, which would require free-text answers - and he raises ideas such as peer marking among students as one approach.

"People interact with and receive information in new ways today, compared with even a few years ago. Universities like Harvard need to be in that space."

Accrediting such courses is another tricky area.
The online courses are promised to be as rigorous as anything else from MIT or Harvard - but successful students will get a "certificate of mastery" and not a degree or any formal university credit. It's being set at arm's length from what's on offer for the paying customers.

If students on campus are paying $50,000 (£32,000) per year, it's going to be difficult to give away qualifications to online learners without charge.

High fees
The edX project has the good fortune to have two wealthy parent institutions - and getting a financial return won't be a pressing necessity.

But Daphne Koller, co-founder of Coursera, says the expansion of online courses will raise difficult questions about what mainstream universities offer for such high fees.

Lecture hall Would lectures be better as online recordings that could be stopped and started?

Because if the content of university courses becomes freely available, what is it that students are paying for?

Is it the interactions with staff? Or is it the time with other students? Is it something to put on a CV?

"This is causing universities to rethink their value to students," says Professor Koller, who is from Stanford University's computer science department.

The most prestigious universities are always going to have enough demand for places - but the emergence of high-quality online courses could be tougher for middle-ranking institutions.

Why would you pay high fees to sit through a mediocre lecture, when you could go online and watch world experts at another university, even if it's in another country?

"The universities in the middle will really have to think about their proposition," she says.

Google economics
Professor Koller says Coursera will keep its content free by following the Silicon Valley approach of companies such as Google.

Continue reading the main story
“Start Quote
For the younger generation, the gap between online and real life is blurred”

End Quote Anka Mulder Delft University
With large numbers of motivated, employable students - so far about 600,000 and rising - there are going to be plenty of opportunities and partnerships for revenue streams.

The online projects are also aimed at meeting the huge international demand for higher education.

In its initial stages, Coursera has acquired students in 190 countries. Outside the US, the biggest numbers are in the UK, Brazil, Russia and India.

"This is a real democratising influence, making a profound change. It will tap into unused talent," says Professor Koller.

"Technology has got to the point where it's feasible. We shouldn't stratify society by who can afford access to education."

Of course there have already been online degrees and courses. The UK's Open University has been a trailblazing pioneer of such distance learning. Stanford has also been experimenting.

In the US, large numbers of students have taken for-profit online degrees aimed at those unable to access campus-based courses.

But so far online projects have been in counterpoint to the mainstream.

Into the mainstream
The entry of such giants such as Harvard, Stanford and MIT means that it is coming into the centreground.

It is also a development that coincides with the growing accessibility of high-quality online video and devices such as iPads and smartphones.

There are already rich seams of free educational material online - such as on iTunes U - and this is increasingly being structured into something more formal.

But there are also warnings against under-estimating the challenges.

William Dutton, professor of internet studies at the Oxford Internet Institute, University of Oxford, says universities have been experimenting with teaching online for a decade, but "it's not there yet".

"It's much harder than teaching a class face-to-face," he says.

It's good that institutions such as MIT and Harvard are putting their shoulder to the wheel, he says, but so far no one has really worked out how to harness the internet for a university degree course.

Moral purpose
Professor Dutton also warns that the funding model of edX - subsidised by two very wealthy institutions - is not going to be affordable by many other universities.

But the idea of open learning has its own "moral purpose", says Anka Mulder, head of Delft University in the Netherlands.

The demand for higher education is growing, both in the developed and developing countries and Dr Mulder says it "can't be achieved by building universities".

She also argues that scepticism about whether courses can be delivered online - and worries about a lack of interaction - is being overtaken by changing social habits.

Talking and sharing online is no longer such a leap of the imagination.

"For the younger generation, the gap between online and real life is blurred," she says.

Dr Mulder says that in five years most universities will be incorporating online learning in some form.

"Open learning is a movement that isn't going to go away," she says