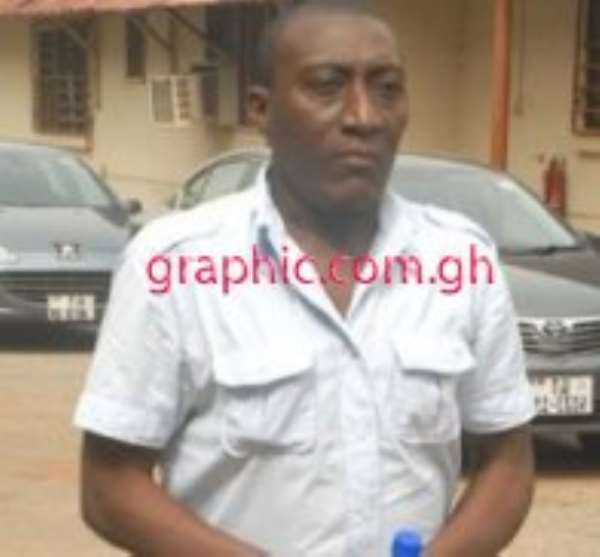 Asem Darkey - Alias Limping Man The Accra Fast Track High Court has remanded into prison custody Christian Sheriff Asem Darkey, aka the Limping Man, who is alleged to have played a major role in the shipment and disappearance of 77 parcels of cocaine, weighing 2,310 kilogrammes, in April 2006.

The decision of the court, presided over by Mr Justice Mustapha Habib Logo, followed a plea by the lawyer for Darkey, Mr George Heward-Mills, to the court to remand his client into prison custody, alleging that besides his client not being fed well while he was in the custody of the Bureau of National Investigations (BNI), he (the lawyer) was being denied access to him.

The case started at the High Court Monday, following the decision of the Accra Circuit Court to discharge Darkey because of a nolle prosequi filed by the Attorney- General’s Department which meant the state was no longer interested in prosecuting the case.

Darkey was, however, re-arrested and taken into custody at the BNI.

The state has also expressed interest in taking the testimony of some key witnesses in camera.

The accused person, who went into hiding from 2006 until February 2, 2012, was arrested by BNI officials at the Korle-Bu Teaching Hospital upon a tip off.

Darkey was indicted for allegedly paying $3,000 to a detective sergeant to facilitate his escape.

His charges have been increased to five from an initial three. He is now facing counts of conspiracy, possession, importation and exportation of narcotic drugs and corruption of a public officer, all of which he has denied.

Darkey told the High Court that he was not fed well by the BNI, as he was being fed a third of what he ate when he was a free man.

His not-too-happy counsel, therefore, prayed the court to remand him into prison custody, so that his relatives could feed him well.

“He had surgery not too long ago and his life is at risk. To stand trial, he needs to be fed well to testify and exonerate himself. It is also very difficult to have access to him and take instructions from him about this case. Sometimes a lawyer-client relationship needs a certain environment,” Mr Heward-Mills said.

But a Principal State Attorney, Ms Yvonne Attakora, had a contrary opinion, saying, “We agree that as he is standing trial, he should be fed well. He is given food three times a day.”

She explained to the court that Darkey was in BNI custody, instead of police custody, because he was arrested by the BNI and it was the bureau that had conducted investigations into the matter, adding that counsel for the accused could visit his client at any time.

According to the facts of the case, about midnight on April 26, 2006, a vessel, the MV Benjamin, reportedly carrying about 77 parcels of cocaine, with each parcel weighing 30 kilogrammes, docked at Kpone/Tema and discharged the cocaine.

The 77 parcels were offloaded into a waiting vehicle which carried them away.

According to the prosecution, in the course of investigations, Darkey’s name featured prominently as the importer and/or owner of the drug.

He is said to be the person who had chartered the vessel at a cost of $150,000 to tow another vessel from Guinea to Ghana.

Darkey, the prosecution noted, was the person who had carted the alleged 77 parcels on the ship’s arrival at Kpone.

The disappearance of the cocaine led to the setting up of the Georgina Wood Committee and the subsequent trial of persons alleged to have played various roles in the whole saga.

Although the committee recommended that Darkey be prosecuted, he had since 2006 proved elusive until his arrest in February 2012.