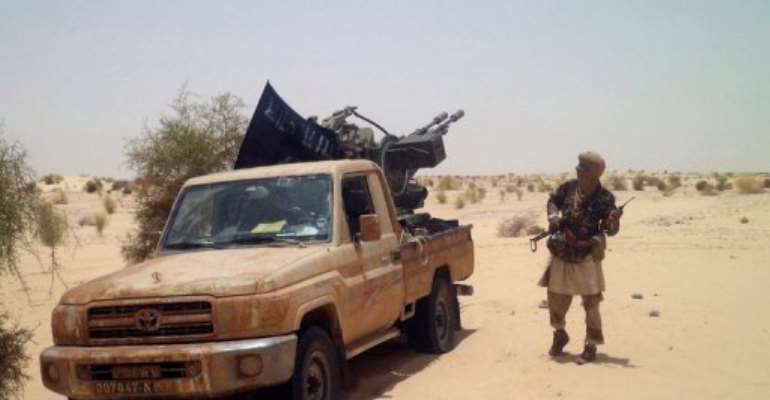 An Islamist rebel of Ansar Dine is pictured in April, near Timbuktu. By Romaric Ollo Hien (AFP/File)

BAMAKO (AFP) - A move by Mali's Tuareg and Islamist rebels to merge and declare a new state in the north left the west African country closer to breakup Sunday, two months after a fateful coup in the south.

As an Islamic state called Azawad took root in the north, the interim president tasked with restoring Mali's unity was in a Paris hotel, recovering from an assault in his office on the eve of the transition's official start.

"The Ansar Dine movement and the National Movement for the Liberation of Azawad (Tuareg MNLA) proclaim their dissolution in Azawad (northern Mali)," the two groups said in an agreement sent to AFP Saturday.

"The two movements have created the transitional council of the Islamic state of Azawad," said the groups, which have been controlling the area for the past two months, in their "protocol agreement".

"We are all in favour of the independence of Azawad," they said, adding that "we all accept Islam as the religion."

The accord between the secular Tuareg and the Islamists comes after weeks of sometimes fraught discussions between two movements which have long been separated in their objectives and ideologies.

In Gao, a major town in the north where leaders of the two movements have been holding talks, the sealing of the deal was greeted by the sound of guns being fired into the air, local residents said.

Tuareg rebels, many of whom were mercenaries who had fought for Moamer Kadhafi and returned heavily armed to their homeland, rekindled their decades-old struggle for autonomy with a massive offensive in mid-January.

A coup by Captain Amadou Sanogo and a group of low-ranking officers ousted the government in Bamako on March 22, saying it was incompetent in handling the Tuareg rebellion.

However the coup only opened the way for the Tuaregs, Ansar Dine -- led by the charismatic Ag Ghaly and backed by Al-Qaeda in the Islamic Maghreb (AQIM) -- and criminal groups to occupy the vast north of the country, an area larger than France.

In a message earlier in the week Abdelmalek Droukdel, the head of Al-Qaeda's African offshoot, advised combatants in northern Mali to impose Sharia law "gradually" so as to achieve the creation of an Islamic state.

The agreement between the Tuareg MNLA and Ansar Dine leaves AQIM's position in "Azawad" unclear but creates a fresh headache for the transitional authorities in Bamako and the West African bloc ECOWAS.

Transitional leaders have stressed their wish to restore the country's territorial integrity but seem unable to guarantee their own safety, let alone mount a credible challenge against the north's new masters.

Mali's interim president Dioncounda Traore was still in France for a private visit and medical treatment after the 70-year-old was assaulted by protesters inside his office on May 22.

His entourage said the tests had revealed nothing alarming and said Traore, staying in a hotel in the French capital with his family, was expected back in Mali in the coming week. They did not provide a date.

Traore, already interim president from April 12, was appointed to lead the long-term transition after mediators from the 15-nation ECOWAS wrested a deal from coup leader Sanogo.

According to that deal, Sanogo will step aside with all the benefits of a former head of state, but his supporters have been clamouring for him to retake the reins of the country.