By Jailan Zayan and Sara Hussein 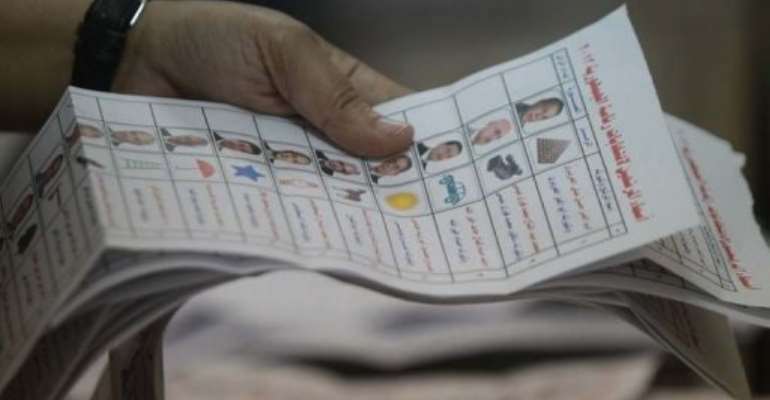 An Egyptian election official counts ballots at a polling station in Cairo. By Khaled Desouki (AFP/File)

The Brotherhood said its candidate was leading the race, with 90 percent of the votes counted, ahead of Shafiq, the last prime minister to serve under Hosni Mubarak, who was ousted in Egypt's 2011 uprising.

"There will be a run-off between Mohammed Mursi and Ahmed Shafiq," after 90 percent of the votes were counted nationwide, the Islamist group said on their website.

A spokeswoman from Shafiq's campaign was unable to confirm the claim. Results of the two-day poll are expected from the country's official electoral body from Sunday.

If the initial results hold, the two candidates will go to a second round run-off vote on June 16 and 17.

The experience of waiting for a electoral result that has not been predetermined is a novel one for citizens of the Arab world's most populous nation, where years of presidential votes always produced the same winner.

The election saw 50 million eligible voters given the chance to choose between 12 candidates in a race that pitted Islamists who pledged to uphold the uprising's ideals against former regime candidates who touted their experience.

US Secretary of State Hillary Clinton congratulated Egypt on its "historic" presidential election, and said Washington was ready to work with a new government in Cairo.

"We will continue to stand with the Egyptian people as they work to seize the promise of last year's uprising and build a democracy that reflects their values and traditions, respects universal human rights, and meets their aspirations for dignity and a better life," Clinton said in a statement.

Electoral commission officials said turnout was around 50 percent over the two days of voting on Wednesday and Thursday, with some voters queuing for hours to cast their ballot.

In schools and other institutions around the country, representatives from Egypt's electoral commission carefully sorted the ballots, each printed with the name, photograph and electoral symbol of the candidates, into neat piles.

Contenders included former foreign minister and Arab League chief Amr Mussa, who touted his experience but was hammered for his ties to the old regime.

Shafiq was also shunned by some for his time in Mubarak's government, but others praised his law-and-order platform in a country where many crave stability.

The powerful Muslim Brotherhood's candidate, Mursi, faced competition from Abdel Moneim Abul Fotouh, a former member of the Islamist movement who portrayed himself as a consensus choice.

And also in the running was Hamdeen Sabbahi, a Nasserist politician who was initially considered a fringe candidate but gained surprise momentum late in the campaign.

The Supreme Council of the Armed Forces, in power since Mubarak's ouster, has vowed to restore civilian rule by the end of June, after a president is elected, but many fear its withdrawal from politics will be just an illusion.

Mubarak, 84 and ailing, is being held in a military hospital on the outskirts of Cairo where he awaits the verdict of his murder trial on June 2.

The former strongman, ousted in a popular uprising last year, is accused of involvement in the killing of some 850 protesters during the uprising and of corruption.