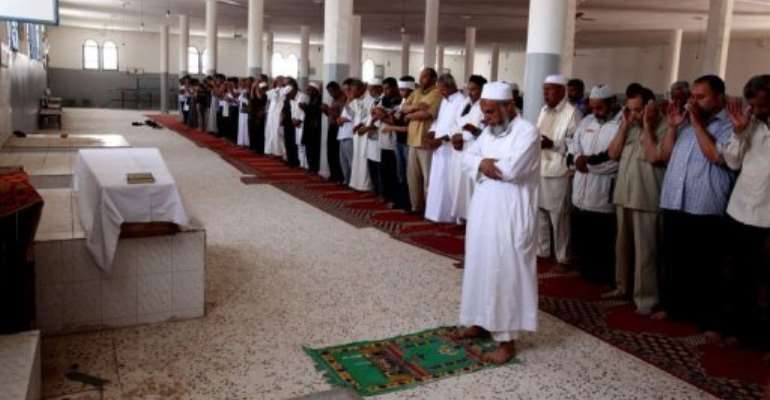 TRIPOLI (AFP) - Abdelbaset Ali Mohmet al-Megrahi, the only person convicted of the 1988 Lockerbie bombing which killed 270 people, was buried on Monday after he died of cancer protesting his innocence to the end.

Well-wishers held traditional Muslim prayers and paid their respects to Megrahi's family in a subdued ceremony in Janzur, a suburb just west of the capital.

"His pain is over now -- he is with God," said Mohammed al-Megrahi, insisting that his brother paid the price for a crime he did not commit.

"There never was exact proof," he said.

As the body was lowered into the grave, one distraught relative shouted: "He is innocent, he is innocent."

Megrahi was found guilty of blowing up Pan Am Flight 103 over the Scottish town of Lockerbie in 1988, killing all 259 people on board and another 11 people on the ground.

He died on Sunday, almost three years after the Scottish government freed him on compassionate grounds following his diagnosis with prostate cancer.

Megrahi's death has revived the debate on whether his conviction was flawed and prompted sharply contrasting reactions in Britain and the United States.

He had always maintained his innocence, arguing that US agencies "led the way" in securing his conviction.

His brother Abdelhakim defended him on Sunday, saying he was the "scapegoat" of the regime of Moamer Kadhafi, toppled in a popular uprising last year.

"He has died and has left us with the feeling of injustice," he told AFP. "Everyone knows that the Kadhafi regime blamed its mistakes on others."

The brother said the family would cooperate fully with any reopened investigation into the Lockerbie killings.

"We are convinced of Abdelbaset's innocence. Yes, we want the truth. It's in our interest," Abdelhakim said.

The US government, which was outraged by Scotland's decision to free the former Libyan airline security chief, said his death concluded "an unfortunate chapter."

"We will continue working with our new partners in Libya toward a full accounting of (Moamer) Kadhafi's horrific acts," said US National Security Council spokesman Tommy Vietor.

Libya's interim government pledged its full cooperation with any further inquiries into the Lockerbie bombing, which some, particularly in Britain, have blamed on Iran and its Palestinian allies rather than Kadhafi.

"In Libya, it is in our interest to close this case and bring out the truth," said Transitional National Council spokesman Mohammed Harizi. "We want to expose the crimes of Kadhafi which did so much harm to the Libyan people."

Britain's Independent newspaper demanded a public inquiry but its calls were rejected by Prime Minister David Cameron who again criticised Megrahi's release by the Scottish authorities, who have devolved powers in judicial affairs.

"Megrahi's death is no reason to stop trying to get to the truth," said the left-leaning newspaper's editorial.

Cameron insisted: "There was a proper process, a proper court proceeding and all the rest of it. We have to give people the chance to mourn those that were lost."

The fact that Megrahi survived much longer than the doctors had estimated provoked indignation in Britain and the United States.

The convict had been greeted as a hero on his return to Kadhafi's Libya, after having served eight years of a minimum 27-year sentence for his role in the Lockerbie bombing.

Several relatives of US citizens killed in the Lockerbie bombing said they were pleased that Megrahi had died.

"He deserved to die," said Susan Cohen, whose daughter Theodora was one of the victims.

"He was a mass murderer. I feel no pity around him. He got to die with his family around him. My daughter, at age 20, died a brutal, horrible death," she told CNN.

But the British father of one of the victims, who has long believed Megrahi was innocent, said it was a sad day.

"It is a sad time, I think. I have been satisfied for some years that this man was nothing to do with the murder of my daughter," Jim Swire, whose daughter Flora was killed in the attack, told the BBC,

"I think Scotland has a big question to answer as to why his verdict hasn't long since been reviewed."

In December, Megrahi told several British newspapers in what was billed as a "final interview" that a book being written by investigative journalist John Ashton would clear his name.

"I am an innocent man," he told the papers, including The Times and the Daily Mail.

"I am about to die and I ask now to be left in peace with my family," he said.